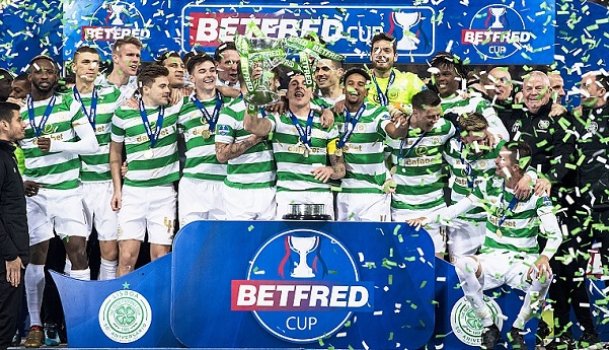 Celtic beat Motherwell 2-0 at Hampden Park on Sunday to retain the Betfred Cup and win their fourth trophy in 12 months.

Celtic beat Motherwell 2-0 at Hampden Park on Sunday to retain the Betfred Cup and win their fourth trophy in 12 months.

The Steelmen were appearing in their first League Cup Final since 2004/05 and more than held their own against the holders in a tight first half.

James Forrest broke the deadlock early in the second period with a fine finish beyond Trevor Carson and into the corner of the net but it took a superb save from Craig Gordon to keep out a Louis Moult effort as Stephen Robinson's side came close to equalising.

The second Celtic goal arrived via a Moussa Dembele penalty on the hour mark - Cedric Kipre was sent off after referee Craig Thomson deemed he had pulled back Scott Sinclair and the Frenchman made no mistake from the spot.

Celtic have now gone 65 domestic games without defeat but Motherwell will have another chance to end that run when the sides meet at Fir Park in the Ladbrokes Premiership on Wednesday.