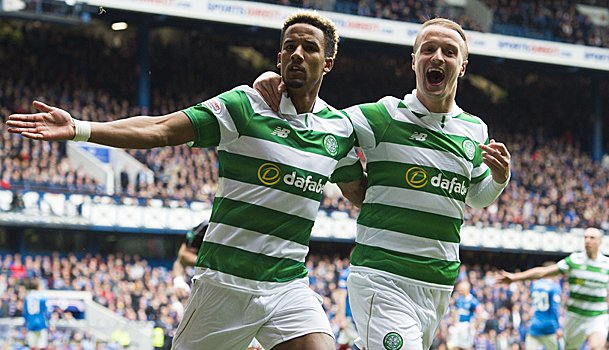 Champions Celtic beat Rangers 5-1 at Ibrox with a dominant display as they remained unbeaten in domestic football this season.

Champions Celtic beat Rangers 5-1 at Ibrox with a dominant display as they remained unbeaten in domestic football this season.

Scott Sinclair converted an early penalty and Leigh Griffiths doubled their lead before the break. Callum McGregor, Dedryck Boyata and Mikael Lustig all scored in the second half, with Kenny Miller netting for Rangers.

Goals in the last 10 minutes from Danny Swanson and Craig Thomson earned St Johnstone a 2-0 win at Aberdeen as they took a step closer to sealing a Europa League place.

The other top-six game saw Hearts and Partick Thistle draw 2-2 at Tynecastle. Kris Doolan gave the Jags the lead but Esmael Goncalves converted a penalty after Danny Devine was sent off. Steven Lawless put Thistle back in front but Andraz Struna levelled late on.

Dundee moved out of the relegation play-off place at Motherwell's expense thanks to a 3-2 win at Fir Park in Neil McCann's first game in charge. Marcus Haber grabbed a double for the Dark Blues, with Mark O'Hara also on target, while Louis Moult and Chris Cadden netted for Well.

Kilmarnock took a big step towards safety by beating Hamilton Accies 2-0 at the SuperSeal Stadium, with first-half goals from Conor Sammon and Jordan Jones.