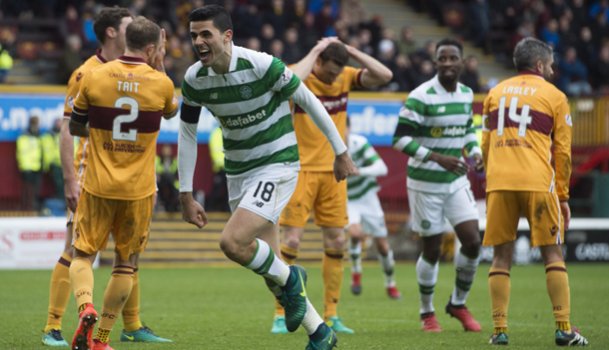 Celtic hit back to beat Motherwell 4-3 in a thrilling Ladbrokes Premiership game at Fir Park on Saturday.

Celtic hit back to beat Motherwell 4-3 in a thrilling Ladbrokes Premiership game at Fir Park on Saturday.

The leaders looked to be heading for their first defeat when Louis Moult scored twice but Callum McGregor and Patrick Roberts hauled them level. Lionel Ainsworth restored Well's lead but Stuart Armstrong equalised almost immediately and Tom Rogic won it in the last minute.

Rangers are in second spot after a 2-1 win over Aberdeen at Ibrox. Kenny Miller and Lee Hodson scored for the Light Blues before Andy Considine pulled one back. Clint Hill and Ryan Jack were both sent off late on.

Hearts slipped to third following a 2-2 draw at Ross County. Arnaud Djoum and Callum Paterson scored for the visitors after Jay McEveley's opener but Liam Boyce converted a penalty with four minutes left. Jamie Walker had a chance to win it for Hearts but his last-gasp spot-kick was saved by Scott Fox.

St Johnstone beat Inverness Caley Thistle 3-0 at McDiarmid Park thanks to goals from Liam Craig, Murray Davidson and Danny Swanson. The visitors had Gary Warren sent off as they dropped to the foot of the table.

Kilmarnock moved into the top six by beating Dundee 2-0 at Rugby Park with goals from Rory McKenzie and Souleymane Coulibaly.

It finished 1-1 between Hamilton Accies and Partick Thistle at the SuperSeal Stadium, with Sean Welsh equalising an Alex D'Acol goal.