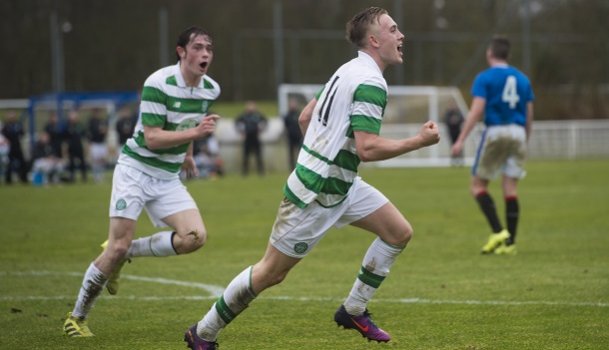 Calvin Miller got the only goal just before half-time as Celtic came out on top in the Glasgow derby played at the Rangers Training Centre.

Also on Tuesday, Partick Thistle thrashed Kilmarnock 5-0 at Airdrie's Excelsior Stadium, helped by a four-goal salvo from Neil McLaughlin - which included a hat-trick in the space of 13 minutes in the first half.

On Monday evening, Hearts defeated last season's runners-up Hamilton Accies 3-0 at Ochilview, with Rory Currie among the scorers, while David Dangana grabbed a last-minute winner as Aberdeen edged out St Mirren 3-2 at the Paisley 2021 Stadium.

Hibernian, who didn't play this week, remain top of the table, with Falkirk in second spot and Partick Thistle third.

In the only Development League East fixture this week, Forfar Athletic beat Raith Rovers 2-1 to move into second place behind Berwick Rangers.

There were no Development League West matches so leaders Morton stay two points ahead of Queen of the South.