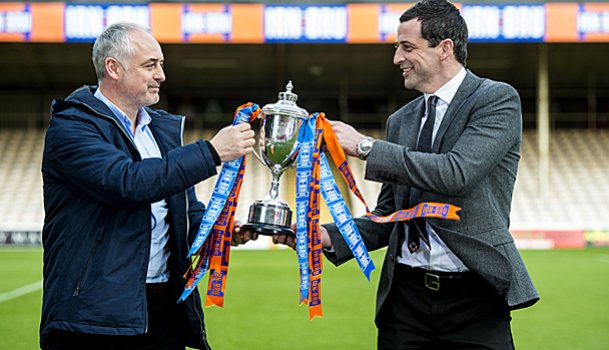 Team news: St Mirren are without cup-tied trio Cammy Smith, Josh Todd and Ben Gordon while Harry Davis, David Clarkson and Rocco Quinn have been missing through injury. United are likely to be without Scott Fraser, Sean Dillon and Blair Spittal.

Road to the final: Dundee United beat Peterhead 3-2 after extra time at Tannadice in round three then defeated Stranraer 1-0 at Stair Park. A Mark Durnan goal earned Ray McKinnon’s men a 1-0 win at Dunfermline in the quarter-finals and they knocked out Queen of the South 3-2 in the semi-final at Palmerston.

St Mirren kicked off with a 4-3 extra time victory against Albion Rovers in Coatbridge then caused an upset by knocking out Hibernian 2-1 at Easter Road in round four. John Sutton scored two late goals as Saints hit back to beat Ayr United in the quarter-final and they were at home again in the semi-final, thumping Welsh champions The New Saints 4-1 after a terrific second-half performance.

Challenge Cup pedigree: St Mirren lifted the trophy in 2005/06, beating Hamilton Accies 2-1 at Airdrie with goals from Simon Lappin and John Sutton when Gus MacPherson was manager. Jimmy Bone was in charge when Saints lost the 1993/94 final 3-0 to Falkirk at Fir Park. Dundee United are playing in the competition for only the second time – they reached the final in 1995/96 but were beaten by Stenhousemuir on penalties after a 0-0 draw.

Past meetings: This is the fourth meeting between the teams this season and they go head to head again at Tannadice on April 22. Dundee United won 2-0 at the Paisley 2021 Stadium in October, and claimed a 2-1 victory at Tannadice on Christmas Eve to go top of the table, but Saints triumphed 3-2 in the most recent encounter earlier this month.

Cup facts: This is the 26th Challenge Cup final and the fifth at Fir Park. Dundee won the first tournament in November 1990, beating Ayr United 3-2 after extra time with a Billy Dodds hat-trick. McDiarmid Park has been the most popular final venue, with nine games. Falkirk have a 100% record in finals, with four wins out of four. Rangers beat Peterhead 4-0 in last season’s decider.

Current form: Dundee United are fourth in the Championship and St Mirren are bottom but it’s Saints who have been in much better form of late. United have won only twice since the turn of the year while the Buddies have lost only two of their last 10 games – to Celtic and Raith Rovers.

Ray McKinnon: “Quite apart from a trophy at stake, we badly need a boost in confidence that a victory would bring. Considering we have only had one home tie, it has been a good run. With teams from Northern Ireland and Wales also involved this year, it gave the competition a bit more spice so I am delighted we have reached the final.”

Jack Ross: “I certainly sense an increase in unity between the supporters and the playing side and that is something I’ve worked hard to try and build. We have a duty to try and keep producing performances that the fans can feed off. I think the change to the tournament has brought a freshness to it and I think the fact we have got a final of profile is good for the competition as well.”

Turnstiles: Open at 11.00am. Fans are urged to arrive at the stadium in plenty of time as enhanced search procedures will be in operation.

Minute's silence: As a mark of respect to those who have lost their lives in this week’s tragic attacks in London, there will be a minute’s silence before the game.