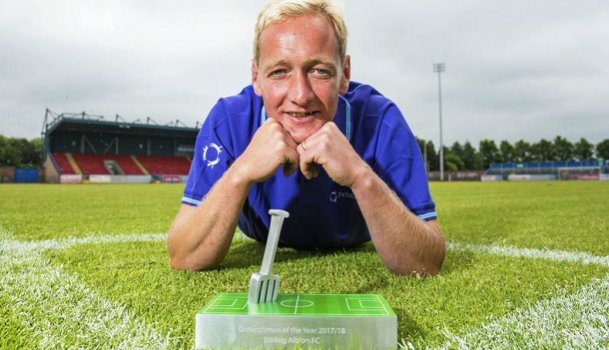 Stirling Albion are celebrating being awarded the Groundsman of the Year trophy for the best pitch in the SPFL in 2017/18.

Stirling Albion are celebrating being awarded the Groundsman of the Year trophy for the best pitch in the SPFL in 2017/18.

After a season-long study of all 42 of the SPFL’s pitches – a joint venture between PFA Scotland, the Scottish FA and Sports Labs, the leading international experts in sports surface development and testing – the Forthbank pitch has beaten some of the biggest grounds in the country to take top spot thanks to the care and attention of Active Stirling Groundsman Graeme Glen.

Throughout season 2017/18, players at all 42 SPFL clubs were asked to rate the pitch they played on every time they were away from home, via a specially-commissioned PitchRater APP.

In total, more than 43,000 answers were received to 12 simple questions, which saw the League 2 side come out with the best rating.

Peterhead’s Balmoor Stadium and Queen’s Park (Hampden Park) were second and third overall, with the divisional winners as follows...