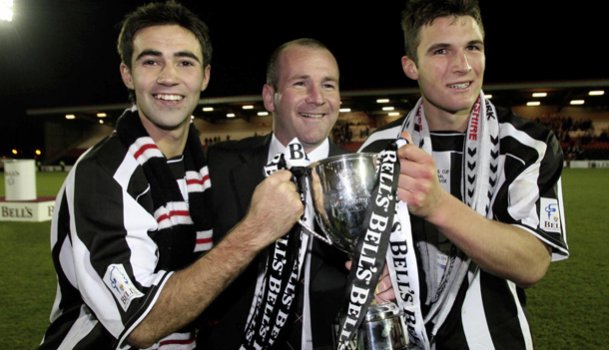 St Mirren are aiming to win the IRN-BRU Cup for the second time when they face Dundee United at Fir Park on Saturday, kick-off 12.30pm.

St Mirren are aiming to win the IRN-BRU Cup for the second time when they face Dundee United at Fir Park on Saturday, kick-off 12.30pm.

The Buddies claimed the trophy back in 2005/06, beating Hamilton Accies 2-1 at Airdrie's Excelsior Stadium with goals from Simon Lappin and John Sutton.

It was a memorable season for the Paisley club, who went on to win the First Division title under the management of Gus MacPherson. Saints clinched the championship with a 2-1 win over Dundee at Love Street in April to complete an impressive double.

MacPherson recalled: “The memory of the final was the crowd and the kick-off was delayed. We’d been going pretty well in the league, as had Hamilton. They were our closest challengers at the time so it was two evenly-matched teams but we played well on the day.

“We got stronger as the game went on and John Sutton scored a really good goal after a fantastic cross from David van Zanten and I think we deserved to win it. The celebrations were good and there was an annual dinner at the hotel so the players were in among the supporters.”