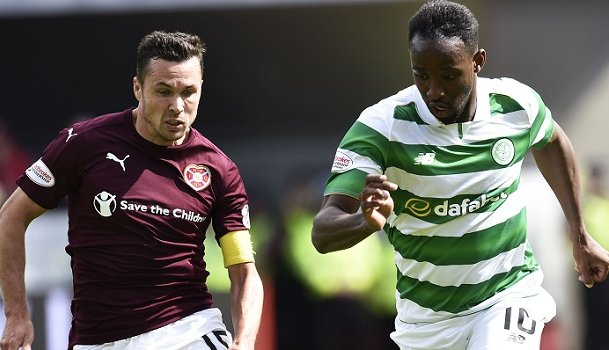 Heart of Midlothian v Celtic – Ladbrokes Premiership (Sunday)
Three points on Sunday at Tynecastle, in a match that is live on Sky Sports at 12.30pm, and Celtic will wrap up the Ladbrokes Premiership title, although defeat for Aberdeen at Dundee tonight would also seal the deal. Hearts are often energised by the home support but go into the game with just one win in the last five Premiership matches and Celtic have an excellent recent record at Tynecastle.

Last encounter: Celtic 4-0 Hearts (29.01.17)
Despite being without Moussa Dembele and Leigh Griffiths, the home side served up a fairly routine victory. Callum McGregor – a late call-up after an injury to Stuart Armstrong – put Celtic ahead but it took until the 77th-minute for their dominance to pay further dividends, Scott Sinclair slotting past Jack Hamilton. Sinclair added another from the spot and Patrick Roberts also netted before the end.  Hearts’ misery was compounded by a serious injury to young centre-back John Souttar.

St Mirren v Ayr United – Ladbrokes Championship (Saturday)
The bottom of the Championship has, of late, become the most unpredictable place in Scottish football.  Although the bottom four – Dumbarton, Ayr United, Raith Rovers and St Mirren –  have remained the same for much of this year, fortunes have fluctuated from week to week.  St  Mirren, who have picked up seven points from their last three games, looked to be closing in on Ayr United but with the Buddies in IRN-BRU Cup final action, Ayr chalked up a huge 2-1 victory against Dumbarton to move four points clear.  Whoever wins on Saturday could go a long way to deciding who survives this season.

Last encounter: Ayr United 0-2 St Mirren (25.02.17)
This match felt, for many, like win or bust for Jack Ross’ Buddies.  A defeat and they would have fallen 11 points behind second-bottom Ayr but instead they moved to within five points of their rivals. John Sutton rounded Greg Fleming for the first goal on 51 minutes and, with the Honest Men pushing for an equaliser, the visitors broke away and Lewis Morgan doubled the lead.

Peterhead v Airdrieonians – Ladbrokes League 1 (Saturday)
Peterhead and Airdrie go into Saturday’s clash with different objectives.  The hosts are on an eight-game winless run in League 1 and find themselves in the relegation play-off place, only four points ahead of Stenhousemuir.  As such, three points would go some way to easing fears of a drop into the league below. For Airdrie, meanwhile, a place in the top four remains the objective.  A  4-2 defeat to Livingston last time out means they sit outside the play-off spots on goal difference; a win on Saturday may propel them back ahead of East Fife.

Last encounter: Airdrieonians 4-1 Peterhead (04.02.17)
Four goals in 21 second-half minutes saw Mark Wilson’s men pick up the three points at the Excelsior Stadium. Peterhead had gone in front through Rory McAllister on 36 minutes and the score remained that way until Jack McKay levelled in 69 minutes. Further goals by Ryan Conroy (71), Andy Ryan (76) and Scott Stewart (90) sealed the win.  It was to be the beginning of Peterhead’s two-month run without victory.

Annan Athletic v Arbroath – Ladbrokes League 2 (Saturday)
The League 2 title race looks like it will go down to the wire.  Last weekend, leaders Forfar lost 3-2 to Berwick Rangers but Arbroath could not capitalise, going down 1-0 to Montrose.  Forfar remain a point ahead of their Angus rivals going into this weekend, where both sides face difficult away fixtures.  The Loons are at Stirling, who are still challenging for a promotion play-off spot after six wins on the trot, while Arbroath go to Galabank take on third-placed Annan.

Last encounter: Arbroath 1-2 Annan Athletic (21.01.17)
Annan recorded an impressive away victory with goals from Darren Ramsay and Raffi Krissian. The result has proven to be the catalyst for a rise to third in the table for Jim Chapman’s men.  Since the victory at Gayfield, they’ve recorded seven wins in nine league games and sit seven points clear in the play-off spots.  For Arbroath, defeat left them eight points behind Forfar.