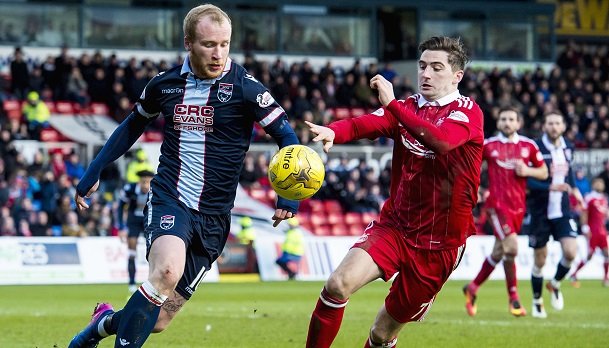 Andy Harrow of The Terrace Scottish football podcast picks out four matches to look out for across the SPFL this weekend.

Andy Harrow of The Terrace Scottish football podcast picks out four matches to look out for across the SPFL this weekend.

Aberdeen made it through to the last eight of the Scottish Cup after a narrow victory in Dingwall earlier this month.  Scott Fox kept the Dons at bay on a number of occasions but could do nothing to stop Shay Logan’s effort from the edge of the box with three minutes left. County were, however, the last team other than Celtic to beat Aberdeen - Jim McIntyre’s side triumphed 2-1 back in December with a late Ryan Dow goal, despite having been reduced to 10 men minutes earlier.

Aberdeen form
Seven wins and one defeat in their last eight league games – to Celtic at Parkhead – has moved Derek McInnes’ side six points clear of Rangers in second place.  Following an incredible 7-2 victory at Pittodrie against Motherwell, the Dons left it late to take all three points at Kilmarnock, coming from behind with goals from subs Jayden Stockley and Peter Pawlett.

Ross County form
A run of four games without a victory has seen the Dingwall club slip out of the top six and into ninth place, three points above the play-off spot.  Their last league win came in the Highland derby on Hogmanay and since then have picked up only one point, at home to Rangers.

The points were shared last time these sides met in December.  Prior to that game, St Mirren sat in last place, four points off Dumbarton in ninth.  With the Sons winning at home to Falkirk, Ayr dropped into the bottom two and Saints fell a further two points behind the play-off spot.  As for the game itself, Paul Cairney gave Ayr the lead just after the hour but a Jamie Adams red card gave the Buddies hope and they equalised through John Sutton with nine minutes left.

Ayr United form
Draws have been the predominant result for Ayr United since December.  As well as four stalemates after 90 minutes in two Scottish Cup ties, they’ve drawn seven of their last 10 league fixtures.  Ian McCall can take the positives from the last two games especially - after a good performance away to Hibernian, Ayr recovered from a man and two goals down to Dumbarton to score twice in stoppage time and salvage a point.

St Mirren form
How Saints must wish they could replicate their cup form in the league.  In cup matches, the Buddies have only lost once – back in July – and have reached the quarter-finals of the Scottish Cup, as well as the final of the IRN-BRU Cup.  Their last league victories came in December, when they won back-to-back games against Queen of the South and Raith Rovers.  Jack Ross’ team go into Saturday’s match eight points behind the Somerset Park men.

Brechin came away with an ultimately straightforward three points at home to Stranraer last time out.  Ally Love and Connor McLennan had given the hosts a 2-0 lead at half-time and the Blues’ task was made harder when Steven Bell was sent off with 20 minutes to go.

Stranraer form
Stranraer’s form recently has been good – they are unbeaten in four – but they still find themselves in ninth position and level on points with bottom club Stenhousemuir.  Encouraging draws against the league’s in-form teams East Fife and Livingston came either side of a victory over Albion Rovers.  Last weekend, the Stair Park men twice came from behind to salvage a further point in a 3-3 draw against Peterhead.

Brechin City form
Brechin still remain within touching distance of the top four – they are sixth, two points off fourth – but have struggled in recent weeks.  Their last league win came on Christmas Eve against Alloa and since then have managed only one point in five outings. Darren Dods will be hoping results begin to turn their way from Saturday.

Stirling Albion form
Stirling and Edinburgh City sit within a point of each other in League 2. While Cowdenbeath are bottom, this fixture pits eighth against ninth. For Albion, their last league win came on January 7 against Clyde, but recent draws against Berwick and Arbroath have boosted them.

Edinburgh City form
The Lowland League champions are yet to taste victory in 2017. After an excellent November and December pulled them into the pack, they’ve since picked up two points in six games. With new Sporting Director Jim Jefferies recently installed, the City fans will be hoping his experience can help the capital club get back to winning ways.