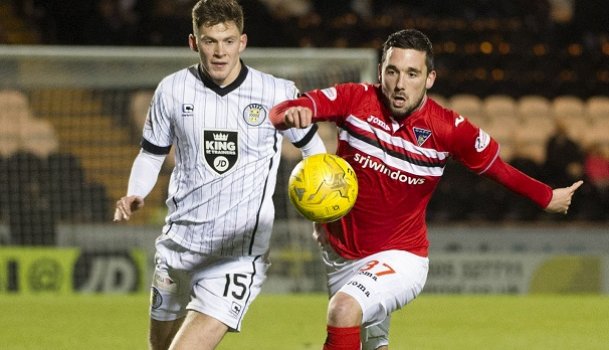 Games of the Weekend: January 14

The winter break continues in the Ladbrokes Premiership but there are full cards scheduled in the Championship, League 1 and League 2.

Last encounter: St Mirren 0-1 Dunfermline (19.11.16)
Dunfermline made it two wins out of two against St Mirren this season after Nicky Clark’s goal settled a tense match at the Paisley 2021 Stadium. The Pars had triumphed 4-3 in a thriller back in September but that was to be their last league victory until the reverse fixture in Paisley. Saints, meanwhile, found themselves at the foot of the Championship table and defeat meant they sat seven points behind second-bottom Dumbarton. Jack Ross’ men could – and perhaps should – have taken a point but they couldn’t find a way past Sean Murdoch.

Dunfermline Athletic
Since the 1-0 win over St Mirren, Dunfermline are unbeaten in the league, with three draws and three wins. The last three fixtures have seen Allan Johnston’s men pick up seven points from nine as they look to move clear of the relegation places.  A draw at home to Falkirk was followed by a deserved 2-0 victory away to Raith Rovers in the New Year Fife derby and an equally impressive 2-0 win at Ayr United. Their recent form has seen the Pars climb to sixth place, only one point behind Raith.

St Mirren
Two wins and two draws since the defeat at home to Dunfermline have failed to reduce the gap between the Buddies and second-bottom in the Championship, which still remains at seven points.  A dramatic last-minute winner away to Queen of the South in early December was followed by a hard fought 1-0 win against Raith Rovers at home and, at that stage, it seemed like Jack Ross’ men might reel in their rivals. While 1-1 draws against Ayr and Morton were respectable, the Morton fixture saw St Mirren’s local rivals claim a 90th-minute equaliser, and the other two fixtures have seen defeats to Dundee United and Queen of the South.

Last encounter: Queen’s Park 2-0 Brechin City (03.12.16)
It was lowest scorers (Queen’s Park) against the best defence (Brechin) last time these sides met in League 1 and it was the Glasgow side who ultimately prevailed. A strong Dario Zanatta run saw him bustle through the defence before being upended. Ross Millen converted the penalty to give the Spiders a half-time lead. The home side doubled their advantage when Ryan McGeever nodded home at close range from a corner with a quarter of an hour to play.

Queen’s Park
Queen’s Park have proven they are genuine promotion challengers over the past few months. After a relatively slow start to the campaign, they went unbeaten in seven league games from early November to Christmas Eve, including impressive wins at Livingston and East Fife. Their run finally came to an end with a New Year’s Eve defeat to Stranraer but the Spiders got back to winning ways last weekend with a 2-1 victory over Airdrieonians - a game which included a sensational team goal, finished by Gregor Fotheringham.

Brechin City
If you were to predict a result from this game, a draw might not be the best choice. The reason? Brechin have had only drawn once in 20 League 1 games this season. Admittedly, that was against this weekend’s opponents back in August. After a run of four consecutive defeats, Brechin won both games in the lead up to Christmas and looked to be back on course. However, narrow defeats to Peterhead and Albion Rovers mean they currently sit only a point above the men from Hampden.

Last encounter: Montrose 2 -1 Clyde (10.12.16)
Both games between Montrose and Clyde have finished 2-1 this season, with Clyde winning the first and Montrose the most recent. The Gable Endies sat bottom of the table prior to the fixture at Links Park but took the lead from a Gary Fraser penalty with 25 minutes on the clock. Peter MacDonald equalised from the spot but new Montrose manager Stewart Petrie picked up a debut win when a great run and cross from Cammy Ballantyne was knocked into the net by Graham Webster.

Clyde
Barry Ferguson’s troops currently lie fifth in League 2 after a run which has seen them pick up only one point in six matches.  While they remain well in contention for a promotion play-off spot – they are only behind fourth-place Annan on goal difference – Clyde now find themselves 17 points behind leaders Forfar.  However, the Broadwood men will be hoping that, inspired by the league’s second-top scorer MacDonald, results take a turn for the better soon.

Montrose
The battle at the foot of League 2 continues and it is increasingly difficult to predict which side will ultimately drop into the play-offs. Montrose currently sit second bottom and two points ahead of Cowdenbeath but, with four teams tied on 21 points they are, incredibly, only four points outside the promotion play-offs. Despite a 3-0 defeat last weekend to Elgin, Montrose’s recent form has been good; two wins and two draws were picked up before that.