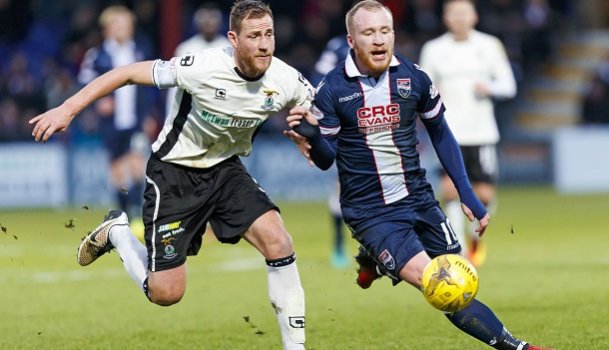 Games of the Weekend: March 18

Andy Harrow of The Terrace Scottish football podcast picks four key games to look out for across the SPFL this weekend.

Andy Harrow of The Terrace Scottish football podcast picks four key games to look out for across the SPFL this weekend.

Inverness Caledonian Thistle v Ross County – Ladbrokes Premiership
The Highland derby takes on added significance this weekend, with both teams battling to avoid relegation. Only four points separate bottom-placed Inverness from Ross County in ninth, so a win for either side could prove vital. Inverness go into the game having lost only one in four, compared to County’s three defeats in the same period, but form doesn’t always count for much in a local derby.

Last encounter: Ross County 3-2 Inverness CT (31.12.16)
Liam Boyce was the County hero for the second derby in a row.  After a hat-trick in another 3-2 win, back in August, he popped up with a brace as the hosts ended the year in style. The Northern Ireland forward put County ahead after two minutes and, although Carl Tremarco equalised with a diving header, Boyce put County ahead at the break. Martin Woods put daylight between the teams and, although Alex Fisher scored a consolation, the visitors would end the day bottom and without a win in 10 games.

Dunfermline Athletic v Ayr United – Ladbrokes Championship
St Mirren’s 3-2 victory over Dundee United in midweek has increased the importance of Saturday’s game at East End Park.  That win for the Buddies moved them to within a point of Ayr, the side currently occupying the relegation play-off spot.  Ayr have won only once in the league since October and will need to improve on that record to hold off the revitalised Paisley side. The Pars sit seven points ahead of Ayr and have lost just once since November.

Last encounter: Ayr United 0-2 Dunfermline Athletic (07.01.17)
First-half goals from Nicky Clark and Andy Geggan earned Dunfermline the points last time the sides met. The win meant the Pars extended their unbeaten Championship run to seven games, while Ayr remained in second bottom, seven points clear of St Mirren. This was the first win in three fixtures between the two this season – both previous games had ended in draws.

East Fife v Alloa Athletic – Ladbrokes League 1
Is there still life in the League 1 title race?  Livingston have been the runaway leaders for much of the season but Jim Goodwin’s Alloa are coming up on the rails, fast. Goodwin received League 1 Manager of the Month award for February after three wins and a draw, and they now sit seven points behind the Almondvale side with a head-to-head to come in April. However, East Fife will provide a stern challenge – they beat Livingston last weekend and are keen to secure a top-four spot as quickly as possible.

Last encounter: Alloa Athletic 3-0 East Fife (28.02.17)
The final game in February secured Goodwin’s award-winning month after a comfortable victory over the Fifers but this is the only game they have lost since November. The hosts took the lead through top scorer Greig Spence and Kevin Cawley doubled the advantage on 38 minutes.  Jamie Longworth made sure of the points with a strike 10 minutes from time.

Clyde v Edinburgh City – Ladbrokes League 2
It’s eighth against ninth on Saturday, with both clubs still looking over their shoulder to Cowdenbeath.  Following a run of seven consecutive defeats, which culminated in the departure of manager Liam Fox, the Blue Brazil have picked up four points from two games and look capable again of catching the sides directly above them.  Clyde are currently four clear of the Central Park men, with Edinburgh City a further three clear after a midweek draw against Berwick. It promises to be a tense end to the season.

Last encounter: Edinburgh City 0-0 Clyde (04.02.17)
This was a draw which didn’t particularly suit either side.  For City it did, at least, halt a sequence of three consecutive defeats, but they would need to wait a further three matches to register another win. For Clyde, the draw came in the midst of 14-game league run without a win – a sequence which has yet to be broken – and has seen the Cumbernauld side slip from promotion challengers to second from bottom.