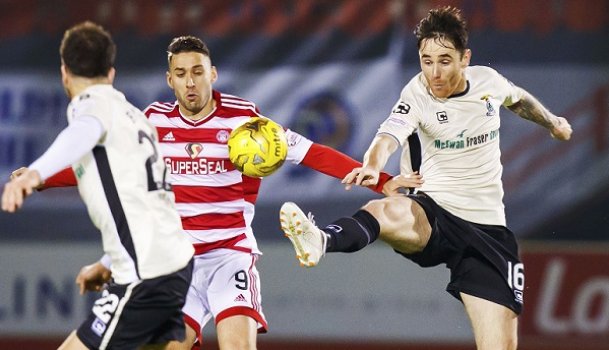 Games of the Weekend: May 6

Andy Harrow of The Terrace Scottish football podcast highlights some key games in the SPFL,&nbsp;as three of the four divisions reach a conclusion.

Andy Harrow of The Terrace Scottish football podcast highlights some key games in the SPFL, as three of the four divisions reach a conclusion.

Inverness CT v Hamilton Accies – Ladbrokes Premiership
The Saturday lunchtime fixture, live on Sky Sports, might be Inverness’s last chance of surviving automatic relegation. Following Friday’s 4-0 derby defeat to Ross County, they sit seven points behind Motherwell and Hamilton and eight behind Dundee. If all three win, the Highlanders will be 10 points adrift with only nine to play for. Victory over Hamilton, though, and those same teams will be nervously glancing over their shoulders again. For Martin Canning’s men, they remain out of the play-off spot only on goal difference, so need the points to keep Inverness and Motherwell at bay.

Last encounter: Hamilton Accies 3-0 Inverness CT
Goals from Alex D’Acol, Grant Gillespie and Rakish Bingham wrapped up a relatively straightforward win for Hamilton in January. It was a victory that moved the home side three points clear of Inverness at the bottom of the table and halted an 11-game winless run.

Raith Rovers v Ayr United / Hibernian v St Mirren – Ladbrokes Championship
It’s crunch time at the bottom of the Championship. Unless there’s a 10-goal swing at Stark’s Park, Ayr United will be automatically relegated but Raith know only a win will do if they are to avoid the play-offs. Even then, it may not make a difference if St Mirren pick up the point they need. The Buddies’ thumping 5-0 victory over the Kirkcaldy men last weekend saw them finally leapfrog Raith and they will stay up with a draw away at the champions. It’s been a remarkable turnaround for the Buddies – at the start of December they were 19 points behind Rovers.

Last encounters: Ayr United 1-0 Raith Rovers / St Mirren 2-0 Hibernian
Raith had midfielder Ryan Stevenson in goals at Somerset last time they met. Stevenson performed admirably, pulling off a number of good saves, but he could do nothing about Farid El Alagui’s winner. St Mirren, meanwhile, recorded an excellent 2-0 victory over the league leaders with Stelios Demetriou grabbing both goals in Paisley.

Stenhousemuir v Brechin City / Peterhead v Alloa Athletic – Ladbrokes League 1
The Great Escape could be on in League 1, too. Following a defeat to Livingston on April 15, Stenhousemuir were bottom, five points behind Peterhead with three games to play. Two wins in a row have propelled the Warriors past the Blue Toon and a victory would save them from automatic relegation. They face a Brechin side who need a point to wrap up a promotion play-off place. For Peterhead, a draw, coupled with a Stenhousemuir loss, would give them a chance to maintain their League 1 status through the play-offs.

Last encounters: Alloa Athletic 0-1 Peterhead / Brechin City 2-2 Stenhousemuir
A thrilling first 16 minutes saw Stenhousemuir overturn an early Andy Jackson strike to lead at Glebe Park. Dougie Hill equalised for the hosts just after half-time but the Warriors held out for a point, despite a red card for David Marsh. Peterhead’s last fixture against Alloa saw them take an excellent three points. Substitute Leighton McIntosh had an eventful game – he came on after 34 minutes, scored the only goal on 49 and was sent off on 75.

Stirling Albion v Arbroath / Forfar Athletic v Annan Athletic – Ladbrokes League 2
It’s Helicopter Saturday in League 2. For so long this season Forfar have led the division but they go into the final fixture behind local rivals Arbroath. A draw last weekend away to bottom-placed Cowdenbeath, together with a victory for the Red Lichties against Elgin – courtesy of a Ryan McCord hat-trick – has left the Loons one point behind with an inferior goal difference. With Annan assured of third and Stirling comfortably mid-table, the title challengers face teams with nothing to lose.

Last encounters: Arbroath 1-1 Stirling Albion / Annan Athletic 1-2 Forfar Athletic
Arbroath came from behind to rescue a point against Stirling after Darren Smith had given the visitors the lead. Steven Doris netted the equaliser for the title chasers. A similar result in that fixture might suit Forfar this weekend and they won their last game against Annan. A Max Wright penalty gave Annan the lead but Forfar responded with goals from Jim Lister and a Callum Home own goal.