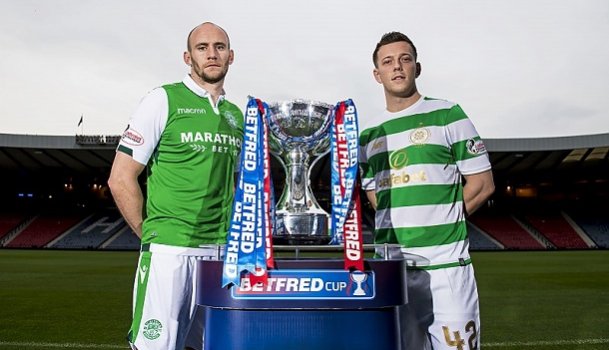 Hibernian and Celtic meet in the first Betfred Cup semi-final at Hampden Park on Saturday, live on BT Sport with a 12.15pm kick-off.

Hibernian and Celtic meet in the first Betfred Cup semi-final at Hampden Park on Saturday, live on BT Sport with a 12.15pm kick-off.

Road to the semis: Hibernian topped Group D, beating Montrose (4-0), Arbroath (6-1) and Alloa Athletic (3-0), and drawing 0-0 at Ross County before losing the shoot-out. Anthony Stokes grabbed a double in the 5-0 home win over Ayr United in the last 16 and converted the late penalty that saw off Livingston 3-2 at Easter Road in the last eight. Celtic thrashed Kilmarnock 5-0 at Parkhead in the last 16, helped by a Leigh Griffiths double and a stunning Kieran Tierney goal. James Forrest scored twice in the 4-0 win at Dundee in the quarter-finals.

League Cup pedigree: Celtic are the current holders, having beaten Aberdeen 3-0 last November to lift the trophy for a 16th time. They reached an incredible 14 League Cup finals in a row from 1964/65 to 1977/78. Hibernian have won the trophy three times, most recently against Kilmarnock in 2006/07. Their last final appearance was a 2-1 defeat to Ross County in 2015/16.

Current form: Hibernian suffered only their second defeat of the season last weekend, losing 1-0 to Aberdeen at Easter Road, although they have drawn four of their last eight matches. Celtic lost 3-0 to Bayern Munich in the Champions League on Wednesday but last Saturday’s 1-0 defeat of Dundee extended their unbeaten domestic to 59 matches going back to May 2016.

This season: It finished 2-2 at Celtic Park on September 30 in the Ladbrokes Premiership, with Callum McGregor and John McGinn both scoring twice.

Stats: Hibs have the Betfred Cup leading scorer in Simon Murray, who has already scored eight goals this season. Their last victory over Celtic was in December 2012, when Leigh Griffiths netted the only goal in an SPL match at Easter Road.

Extra time: If the scores are level after 90 minutes then the tie will be settled after extra time and, if required, penalty kicks.

Tickets: NO ticket sales at Hampden. Celtic’s allocation is already sold out. Tickets for Hibs fans are still available on Friday. Details HERE

Programme: An A4 souvenir programme will be on sale, priced £5.

Important information: All fans should note that enhanced search arrangements will be in place. This additional safety measure has the potential to delay entry into the ground so fans are strongly encouraged to get to the stadium as early as possible. Turnstiles open 90 minutes before the match begins, ie 10.45am.

Roadworks: There are major roadworks on Aikenhead Road near the stadium. Full details and recommended travel routes can be found HERE.