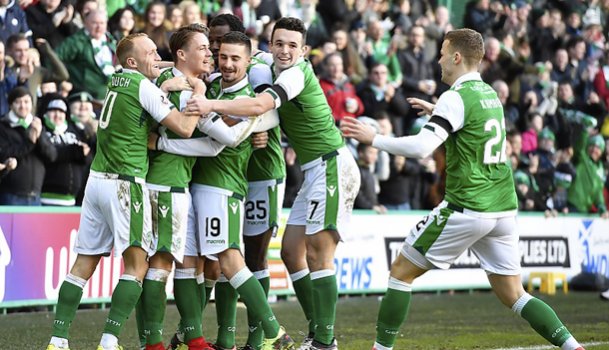 Hibernian defeated Aberdeen 2-0 at Easter Road to move to within two points of third-placed Rangers in the Ladbrokes Premiership.

Hibernian defeated Aberdeen 2-0 at Easter Road to move to within two points of third-placed Rangers in the Ladbrokes Premiership.

Martin Boyle and Florian Kamberi got the goals for Neil Lennon's side in front of 19,551 fans in the capital. Stephen O'Donnell was the matchwinner as Kilmarnock moved into the top six with a 1-0 victory over Motherwell at Fir Park while Simon Murray grabbed a late double as Dundee earned a vital 2-1 win away to Partick Thistle. Jason Naismith cancelled out a Kyle Lafferty goal as Ross County and Hearts drew 1-1 at the Global Energy Stadium.

Livingston shrugged off the loss of an early goal to see off Ladbrokes Championship leaders St Mirren 4-1 at the Tony Macaroni Arena, helped by a Ryan Hardie double and a stunning Lee Miller goal. Play-off rivals Queen of the South and Morton drew 1-1 at Palmerston and Falkirk scored in the last minute to beat bottom club Brechin City 1-0 at Glebe Park.

Ayr United have cut Raith Rovers' lead at the top of Ladbrokes League 1 to six points with a game in hand thanks to a 3-0 win over East Fife at Somerset Park while Barry Smith's men were held to a 2-2 draw by Albion Rovers at Cliftonhill. Alloa Athletic stay just ahead of Arbroath in the play-off places after a 0-0 draw at Gayfield. Forfar Athletic are off the bottom after thrashing Stranraer 5-1 at Station Park and Queen's Park now prop up the table after losing 2-1 to Airdrieonians at the Excelsior Stadium.

Montrose remain six points clear in Ladbrokes League 2 after twice coming from behind to draw 2-2 at Elgin City as second-placed Peterhead were held 1-1 by Berwick Rangers at Balmoor. Third-placed Stirling Albion saw off Annan Athletic 3-0 at Forthbank and Stenhousemuir beat Edinburgh City 1-0 at Ochilview. Clyde made it five wins in a row by beating bottom club Cowdenbeath 2-0 at Broadwood.