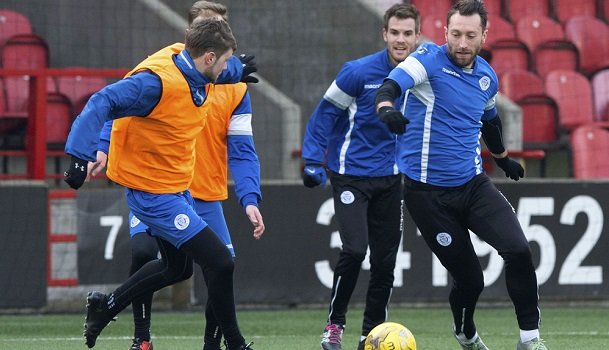 It&#39;s semi-final weekend in the IRN-BRU Cup, with the focus on Palmerston on Saturday and the Paisley 2021 Stadium on Sunday.

It's semi-final weekend in the IRN-BRU Cup, with the focus on Palmerston on Saturday and the Paisley 2021 Stadium on Sunday.

Road to the semis: Ray McKinnon's men beat Peterhead 3-2 after extra time at Tannadice then won 1-0 at Stranraer before defeating Dunfermline by the same score at East End Park. QOS have been at home in every round - they thrashed Stenhousemuir 7-1, beat Linfield 2-0 after extra time then saw off Alloa 2-0.

Cup pedigree: Queens have won the trophy twice - they beat Brechin City 2-0 at Broadwood in 2002/03 and defeated Partick Thistle on penalties after a 1-1 draw at Almondvale in 2012/13. They have been runners-up twice, losing to Falkirk in 1997/98 and Ross County in 2010/11. Dundee United were finalists in 1995/96 but were shocked by Stenhousemuir in a penalty shoot-out after a 0-0 draw at McDiarmid Park.

Road to the semis: Saints beat Albion Rovers 4-3 after extra time in Coatbridge then knocked out Hibernian with a 2-1 win at Easter Road. St Mirren scored two late goals to defeat Ayr United 2-1 in the last eight. The New Saints have won away to Forfar (3-1) and Livingston (3-0) to reach this stage.

Current form: St Mirren won 3-2 at East Fife in the Scottish Cup on Saturday and have lost just one of their last five games but remain bottom of the Championship. TNS have enjoyed a record-breaking season in Wales but suffered their first defeat of the season on Saturday, losing 1-0 to Carmarthen Town.

Cup pedigree: St Mirren won the Challenge Cup in 2005/06, beating Hamilton Accies 2-1 at the Excelsior Stadium, and were runners-up to Falkirk in 1993/94. TNS are appearing in the competition for the first time.

PIC: IRN-BRU Cup top scorer Stephen Dobbie, with five goals so far, trains with his team-mates at Broadwood ahead of the semi-final against Dundee United.