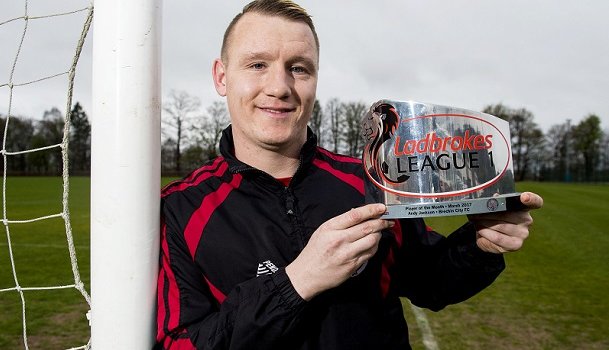 Jackson is League 1 Player of Month

Brechin City striker Andy Jackson has been voted Ladbrokes League 1 Player of the Month for March after netting in all five games.

Brechin City striker Andy Jackson has been voted Ladbrokes League 1 Player of the Month for March after netting in all five games.

The former St Johnstone forward scored against Peterhead, Airdrie, Queen's Park, Alloa and East Fife to take his tally to eight in nine matches and 15 for the season overall.

Brechin currently occupy the final play-off place as they prepare to face second-placed Alloa at the Indodrill Stadium on Saturday.

Jackson, 29, told Ladbrokes News: "It’s good to get the recognition for scoring some goals and we’ve done well lately. The manager let me know and I was delighted.

“If I hadn't been injured I could have hit 20 goals, which would have been amazing, but there are still four games left and I’ll hopefully get close to it.

“It’s in our own hands - we’re in the play-off spots just now. Alloa on Saturday is a big game and I’d say it’ll take three wins from four to make sure we make it into the play-offs.”