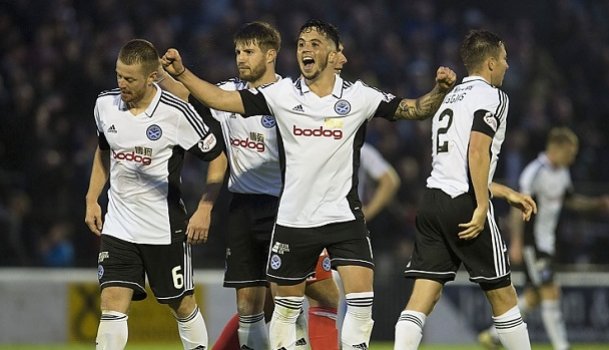 There are four games in Ladbrokes League 1 on Saturday, with the top-of-the-table clash between Ayr United and Raith Rovers delayed until Tuesday.

There are four games in Ladbrokes League 1 on Saturday, with the top-of-the-table clash between Ayr United and Raith Rovers delayed until Tuesday.

That’s because Rovers are in IRN-BRU Cup quarter-final action away to Dumbarton on Saturday – they will head for Somerset Park in midweek level on points with the Honest Men but in second spot on goal difference.

Barry Smith’s men, who have a game in hand following the abandonment of their fixture at Stranraer last month, have the best defensive record in the SPFL along with Celtic, while Ian McCall’s side are the top scorers in the country.

A run of three straight wins has hoisted Jim Goodwin’s Alloa Athletic to third place and they will go for four in a row away to Albion Rovers. Brian Kerr’s men have been excellent on the road but have struggled at Cliftonhill and the Wasps will hope to take advantage.

Queen’s Park have slipped to the foot of the table and are yet to win at Hampden in League 1 this season. The Spiders lost at Stranraer last weekend and welcome Arbroath to the National Stadium – Dick Campbell’s team have recorded some impressive results on the road and are just outside the play-offs.

Jim Weir’s Forfar Athletic moved up to ninth after winning away to Albion Rovers and take on East Fife at Station Park. The visitors’ recent form has been W-L-W-L-W-L so they will be hoping that sequence continues on Saturday against a Loons side who have lost just one in five.

Stranraer are one of five clubs covered by just a couple of points in the middle of the table and head for the Excelsior Stadium to play an Airdrieonians team who are down in eighth place but have lost just one of their five home fixtures.

For and against…
Most goals scored: Ayr United (35)