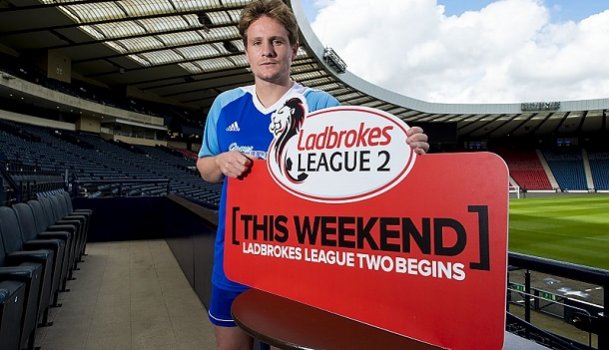 We look ahead to the 2017/18 Ladbrokes League 2 season, with Peterhead the favourites to make an immediate return to League 1.

We look ahead to the 2017/18 Ladbrokes League 2 season, with Peterhead the favourites to make an immediate return to League 1.

Annan Athletic
Manager: Peter Murphy
Title odds: 12/1
First two games: Peterhead (H), Clyde (A)
Annan Athletic were third in Ladbrokes League 2 last time out but lost to Forfar in the play-off semi-finals and have seen long-serving boss Jim Chapman, and several of the squad, join Clyde. Their new manager is ex-Carlisle and Ayr defender Peter Murphy, with Kevin Rutkiewicz his No 2. Murphy has brought in several players from Queen of the South, including Jim Atkinson and Scott Hooper, with experienced former Hearts midfielder Ryan Stevenson among his other signings.

Berwick Rangers
Manager: John Coughlin
Title odds: 25/1
First two games: Clyde (H), Stirling Albion (A)
Berwick were eighth in League 2 last season, five points ahead of Cowdenbeath, and had the poorest defensive record in the division. Boss John Coughlin has brought in a number of loan players - Robby McCrorie (Rangers), Andrew Irving (Hearts), Callum Donaldson (Hibernian) and Kevin Waugh (Hibernian). Only lost out to late goal in their final Betfred Cup tie at Motherwell on Saturday but picked up just one point in their group.

Clyde
Manager: Jim Chapman
Title odds: 5/1
First two games: Berwick Rangers (A), Annan Athletic (H)
It’s been a summer of change at Broadwood. Manager Jim Chapman has arrived from Annan Athletic and has brought in several of his former Galabank charges, including Blair Currie, Max Wright, Darren Ramsay and Smart Osadolor. The Bully Wee picked up a couple of good wins in the Betfred Cup and will be hoping to challenge for promotion after a dreadful second half to last season saw them finish only three points above bottom club Cowdenbeath.

Cowdenbeath
Manager: Billy Brown
Title odds: 14/1
First two games: Elgin City (A), Edinburgh City (H)
Finished bottom of League 2 in May but preserved their SPFL status after a penalty shoot-out win against Lowland League champions East Kilbride at Central Park. Billy Brown has since stepped up from assistant to replace Gary Locke, who has taken up an ambassadorial role with Hearts. Beat Buckie Thistle in the Betfred Cup but lost to Dundee, Dundee United and Raith in a tough Group C. Summer signings include defender David Syme (Raith Rovers) and striker Josh Morris (Hawick Royal Albert).

Elgin City
Manager: Jim Weir
Title odds: 12/1
First two games: Cowdenbeath (H), Peterhead (A)
Elgin looked certain to at least claim a play-off spot last season until a collapse in form, which coincided with an injury to League 2 top scorer Shane Sutherland, saw them slip down the table and out of the top four on the last day of the season. The Borough Briggs men suffered four defeats out of four in the Betfred Cup and Sutherland remains on the sidelines. New signings include ex-Inverness CT striker Calum Ferguson from Albion Rovers and veteran midfielder Jon Paul McGovern from Clyde.

Montrose
Manager: Stewart Petrie
Title odds: 10/1
First two games: Edinburgh City (A), Stenhousemuir (H)
Stewart Petrie replaced Paul Hegarty as manager halfway through last season and did a remarkable job as the Gable Endies moved from relegation candidates to clinch fourth place on the last weekend of the season. Peterhead proved too strong in the play-offs but it was an impressive feat from a club who have been in the bottom division for 20 years. Have retained the nucleus of that squad and new additions include former Dundee United defender Sean Dillon as a player/coach.

Peterhead
Manager: Jim McInally
Title odds: 6/5 favourites
First two games: Annan Athletic (A), Elgin City (H)
The Blue Toon are aiming to bounce back after suffering a surprise relegation last season, losing to Forfar Athletic in the play-off final . Jim McInally has revamped his squad, with keeper Greg Fleming, winger Willie Gibson and midfielder Paul Cairney among his summer signings while prolific striker Rory McAllister will again be a key man. Peterhead impressed in the Betfred Cup, beating Hearts along the way, and were the only team not to progress with nine points. They are short-priced favourites to be champions come the end of April.

Stirling Albion
Manager: Dave Mackay
Title odds: 8/1
First two games: Stenhousemuir (A), Berwick Rangers (H)
Finished sixth in the table last season, having been bottom in December. Flirted with the promotion play-offs after a January squad revamp by new boss Dave Mackay and will hope to mount a sustained challenge this time round. The Binos impressed in the Betfred Cup, picking up seven points against Inverness CT, Forfar and Brechin, and their new recruits include Clyde pair Ewan McNeil and Peter MacDonald as well as winger Callumn Morrison, on loan from Hearts.

Stenhousemuir
Manager: Brown Ferguson
Title odds: 4/1
First two games: Stirling Albion (H), Montrose (A)
Had spent eight seasons in League 1 before finishing bottom of the table, although their haul of 39 points was only seven off fifth place in a very tight division. Second favourites with the bookies to go straight back up but much will depend on how the 13 new signings gel. Goalkeeper Chris Smith (Stirling Albion), Martin Scott (Arbroath) and Ross and Michael Dunlop (both Albion Rovers) are among those brought in by Warriors boss Brown Ferguson this summer.

Odds supplied by Ladbrokes and are subject to change