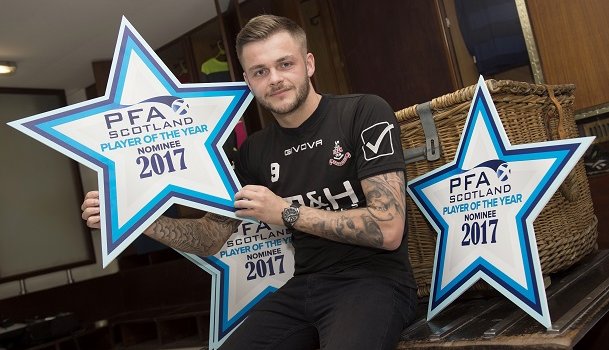 League 1 Team of the Year

Craig Fowler selects his League 1 Team of the Season for 2016/17, with Airdrieonians striker Andy Ryan named as the star man.

Craig Fowler selects his League 1 Team of the Season for 2016/17, with Airdrieonians striker Andy Ryan named as the star man.

GK - Ross Stewart (Albion Rovers)
An excellent season for the Rovers No 1, who has been rewarded with full-time football after St Mirren scooped him up for next season. He played a big part in the Coatbridge club remaining in the third tier.

RB - Craig Halkett (Livingston)
A regular in the SPFL Team of the Week, Halkett was impressive at centre-back and when asked to fill in on the right side of defence. The fact team-mate Sean Crighton could have easily made the team, and that he's one of four Livingston players included, shows their dominance this season.

CB - Ryan McGeever (Queen's Park)
The Spiders handled the step up to League 1 with a surprising amount of ease, challenging for a spot in the play-offs rather than fighting against relegation. McGeever, in particular, stood out from the crowd, putting in a number of fine displays at centre-back.

CB - Jonathan Page (East Fife)
Both Page and East Fife team-mate Jason Kerr impressed across the campaign, helping the club to register the joint-second best defensive record in the division.

LB - Liam Dick (Stranraer)
The 21-year-old was arguably his side's best player as Stranraer rebounded from a poor first half of the campaign to finish in seventh place. Starring throughout was the former Falkirk full-back, who showed both attacking and defensive prowess down the left-hand side, which earned attention from clubs in the second tier.

MC - Scott Pittman (Livingston)
Looked upon as a neat-and-tidy, possession-centric player in the Championship, Pittman used Livingston's drop down a level to add a different dimension to his game. Taking on a more combative, energetic style, Pittman plundered 10 goals in all competitions and was a real driving force from the centre of the park.

MC - Jordan Kirkpatrick (Alloa Athletic)
Another player joining St Mirren next term after the single most impressive season of his career to date. The midfielder scored a highly impressive 17 goals as the Wasps finished the season as the second-strongest side behind Livingston.

MC - Iain Flannigan (Alloa Athletic)
Not quite as prolific in front of goal as his team-mate but still returned an admirable eight goals over the campaign. On his day, the experienced midfielder can simply run the show.

FC - Liam Buchanan (Livingston)
The top goalscorer in the best team in the division, Buchanan scored 22 times in the league and 27 in all competitions. Livingston were fortunate to hold on to a player of such talent when they dropped down and they are keen to get him signed up again for the Championship adventure.

FC - Andy Ryan (Airdrieonians)
The best player in the division. Kirkpatrick and Buchanan were excellent, though fans would have to admit they had more of a stellar supporting cast. Without Ryan's goals and general all-round play, it's hard to say where the Diamonds would have finished. The top goalscorer this season, Airdrie fans are delighted he's under contract for another year as they look to move up to the second tier.

FC - Danny Mullen (Livingston)
Another player who excelled from Livingston's drop into the third tier. Mullen went from a squad player to one of the most important names on the teamsheet. Always an energetic and willing runner, he added goals to his game, netting 17 times across the campaign.