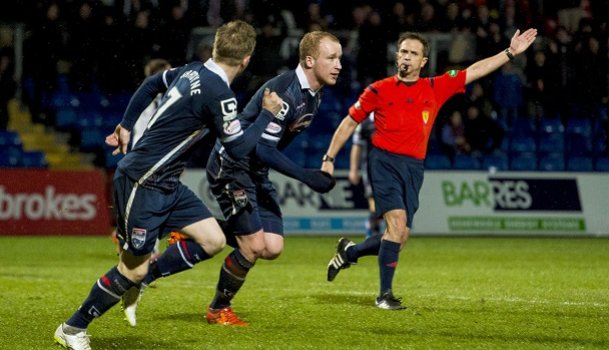 Ross County striker Liam Boyce&rsquo;s hat-trick against Dundee on Boxing Day took him up to 25 goals for the calendar year.

Ross County striker Liam Boyce’s hat-trick against Dundee on Boxing Day took him up to 25 goals for the calendar year.

Seventeen of those have come this season - 13 in the league, meaning he is the Ladbrokes Premiership’s third-top scorer, just one behind Adam Rooney and Leigh Griffiths.

Those 25 goals include two other hat-tricks – one against St Mirren in April and another in the 7-0 League Cup victory over Falkirk earlier this season.

An all-round striker who fits perfectly into Jim McIntyre’s 4-4-2, Boyce is flanked by two natural wingers, supported by full-backs who are instructed to get the ball into the box as often as possible.

As you can see from the goal map, Boyce scores the majority of his goals in and around the six-yard box, mostly through getting on the end of those crosses.

He is physically strong and can muscle past opponents while getting to the near post, yet is nippy enough to lose his marker and finish in a variety of ways.

For instance, he expertly volleyed home Ricky Foster’s cross during their 5-2 victory at the weekend, finished with an improvised backheel during his hat-trick v Falkirk and can also carve out opportunities for himself, much like his goal at Fir Park last season.

Boyce has formed a terrific partnership with Craig Curran since the latter signed for the club 12 months ago. Together they have scored exactly 50% of County’s 74 goals since Curran’s first start.

Even during the spells when Boyce is not scoring, he is still heavily involved in his side’s attacks, missing chances as opposed to not getting on the end of any.

You always know the goals will return and Boyce recently followed up his five matches without a goal with six in six matches.

His international manager Michael O’Neill has been keeping a close eye on him and on this form he will be difficult to ignore when the Northern Ireland EURO 2016 squad is announced.