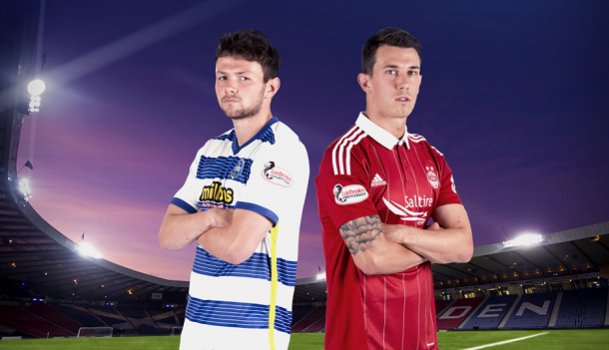 Morton and Aberdeen meet in the first Betfred Cup semi-final at Hampden on Saturday, live on BT Sport with a 12.15pm kick-off.

Morton and Aberdeen meet in the first Betfred Cup semi-final at Hampden on Saturday, live on BT Sport with a 12.15pm kick-off.

A place in the final on Sunday November 27 is the prize at stake, against Rangers or Celtic, who go head to head at the National Stadium on Sunday

Road to the semis: Morton topped Group H without conceding a goal. They drew 0-0 at Albion Rovers before winning on penalties, defeated Clyde 1-0 at Cappielow and Kilmarnock 2-0 at Rugby Park then rounded off with a 2-0 home victory over Berwick Rangers. Jim Duffy’s men defeated Hamilton Accies 2-1 at the SuperSeal Stadium in the last 16 and beat Dundee United 2-1 at Cappielow in the quarter-finals with goals from Jai Quitongo and Thomas O’Ware.

Aberdeen entered the tournament in the last 16 and were 2-1 winners against Ayr United at Somerset Park. Derek McInnes’ men then faced St Johnstone at Pittodrie in the quarter-finals and edged a tight match 1-0 with a last-minute Adam Rooney header.

League Cup pedigree: Aberdeen have won this competition on six occasions, most recently in 2013/14 when they beat Inverness Caley Thistle on penalties after a 0-0 draw at Celtic Park. The Dons’ most recent League Cup semi-final was in January 2015 when they were beaten 2-1 by Dundee United at Hampden after taking the lead through Donervorn Daniels. Aberdeen are appearing in their 25th semi-final and have won 13 of the previous 24.

Morton reached their only League Cup final in 1963/64 when they beat Hibernian 1-0 in a replay at Ibrox but were beaten 5-0 by Rangers in the decider.  This is their fifth League Cup semi-final appearance but their first since 1979/80, when they lost 2-1 to Aberdeen at Hampden.

Past meetings: The teams last met in this competition in August 2012 when Aberdeen won 2-0 after extra time in Greenock with goals from Gavin Rae and Scott Vernon. In September 1996 Dean Windass scored four in extra time as the Dons won a remarkable match 7-3 at Cappielow. Aberdeen have won 10 of the 14 League Cup meetings to Morton's three, with one draw.

Current form: Aberdeen head for Hampden on the back of a 4-0 win over Ross County last weekend, while Morton went one better, thrashing Queen of the South 5-0 at Palmerston.

Tickets: On sale from 10.00am at Hampden – full details HERE

Extra time: If the scores are level after 90 minutes, extra time and penalties, if required, will settle the outcome.

Turnstiles: Open at 10.45am. All fans attending should note that enhanced search arrangements will be in place at this fixture. This additional safety measure has the potential to delay entry into the ground so fans are strongly encouraged to get to the stadium as early as possible.

Travel information: Advice from Police Scotland can be found HERE