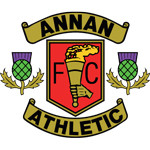 Annan Athletic manager Peter Murphy has signed a new two-year deal that will keep him at Galabank until summer 2021.

The former Carlisle United and Ayr United defender took over from Jim Chapman in June 2017 and has put together a squad challenging for promotion to Ladbrokes League 1.

Annan lead Clyde 1-0 after the first leg of their play-off final and are 90 minutes away from potentially moving up from League 2 for the first time since joining the SFL in 2008.