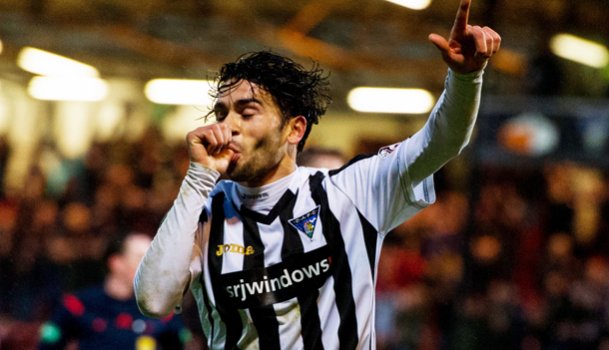 Second-placed Ayr United defeated Brechin City 2-1 at Somerset Park thanks to early goals from Alan Forrest and Craig Moore. Robert Thomson pulled one back in stoppage time for the visitors, who slip to the foot of the table.

Peterhead staged a remarkable late fightback to beat Airdrieonians 4-3 at the Excelsior Stadium and go third in the table. Rory McAllister's penalty cancelled out David Cox's opener but Liam Watt and Nicky Cadden (penalty) had the Diamonds 3-1 up going into the last six minutes.

Ryan Strachan pulled one back, Jordon Brown equalised and Ally Gilchrist struck in stoppage time. Airdrie had keeper Neil Parry sent off in the first half and the Blue Toon's Steven Noble saw red with 13 minutes left.

Stranraer are off the bottom after a thumping 5-1 win against Stenhousemuir at Ochilview. Ross Meechan gave the Warriors the lead but a Craig Malcolm hat-trick, one a penalty, and goals from Jamie Longworth and Sam McCloskey earned Brian Reid's men an emphatic victory.

The game between Cowdenbeath and Albion Rovers at Central Park was postponed due to a waterlogged pitch.