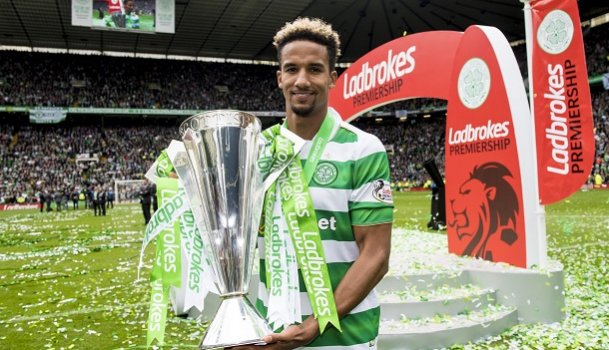 Premiership Team of the Year

Craig Fowler selects his Premiership Team of the Season for 2016/17, with Celtic&rsquo;s Scott Sinclair the star man after an outstanding campaign.

Craig Fowler selects his Premiership Team of the Season for 2016/17, with Celtic’s Scott Sinclair the star man after an outstanding campaign.

GK - Joe Lewis (Aberdeen)
It was a close run thing between big Joe and Celtic goalkeeper Craig Gordon but the Aberdeen man gets the nod. Quite simply, he had far more to do over the course of the season and he did it very well, pulling off an array of stunning saves and helping the Dons to two cup finals and second place in the Premiership.

RB - Shay Logan (Aberdeen)
Again, this is a little harsh on a Parkhead star, as Mikael Lustig was terrific in 2016/17. However, in an attempt to try and separate the two - who are clearly the best two right-backs in the country - the fact Logan played every single game for the Dons did come into it. A terrific player going forward and in defence, he continued his fine form in the North East.

CB - Joe Shaughnessy (St Johnstone)
Another top-six finish and another European qualification for Tommy Wright's men. Helping them to fourth place was ex-Aberdeen stopper Joe Shaughnessy. The Irishman has gone from strength to strength since making the switch from Perth and over the course of the campaign he was his side's most consistent performer.

CB - Liam Lindsay (Partick Thistle)
The young centre-half enjoyed a terrific break-out season at the heart of the Partick Thistle back-line. It's a shame the Jags finished the campaign on the end of a couple of hammerings by Celtic and Aberdeen because from late December until early April you'd be hard pressed to find a better defence in the league, with Lindsay the stand-out performer. He also chipped in with seven goals.

LB - Kieran Tierney (Celtic)
He missed a couple of months through injury, but it doesn't matter, Tierney went into this campaign off the back of a terrific debut season and somehow managed to better his performances. In addition to his stellar defensive play, Tierney was a huge part of the Celtic attack, dashing up the line consistently and providing the width which allowed Scott Sinclair to do damage inside.

MR - Jonny Hayes (Aberdeen)
The top-flight's leading assist maker, Hayes had another terrific season on the wing for Aberdeen. Though the Dons are losing Niall McGinn and Ryan Jack, the signing of Hayes to a new two-year contract earlier in the season could well prove to be the most significant bit of business. Another campaign such as this one from their star man, and Aberdeen will surely be in contention for a cup final appearance again next season.

MC - Scott Brown (Celtic)
You'd be hard pressed to find anyone in Scottish football more consistent than the Celtic captain this season. He bounced back spectacularly from a disappointing 2015/16 campaign, showing in no uncertain terms that he still had a lot to give at the highest level. Those performances continued from the opening couple of months right through to the end.

MC - Stuart Armstrong (Celtic)
Undoubtedly the most improved player in the top flight, if not all of Scottish football this past season. Armstrong's form from early November onwards was sensational, and had he started the season in such vein then he would surely have won the Player of the Year award. In addition to his dominating play in the engine room, he chipped in with a highly-impressive 17 goals in the league.

ML - Scott Sinclair (Celtic)
The attacking midfielder cleaned up at the various Player of the Year award ceremonies and he's the star man in this team. Aside from his goals and assists, his mere presence on the left wing brought so much to Celtic. Fast, powerful, ruthless, devastating, Sinclair occupied minds of defenders like nowhere else and contributed to the fabulous seasons enjoyed by guys like Armstrong, Tierney and Dembele.

FC - Liam Boyce (Ross County)
He may have been left off the PFA Scotland Player of the Year XI but there's no way he's being omitted from this team. Boyce's personal achievements were incredible this season. He finished top goalscorer in the league despite playing for a side that battled against relegation until the final few games, not to mention a near three-month spell of playing in midfield at the beginning of 2017.

FC - Moussa Dembele (Celtic)
In all likelihood, were it not for injury, Dembele would have finished the season as top goalscorer in the Ladbrokes Premiership, as demonstrated by his goals-per-minute ratio being the second best in the league behind Leigh Griffiths. Going into the campaign, it was always going to take something pretty special to knock Griffiths from the starting XI and that's exactly what Dembele provided.