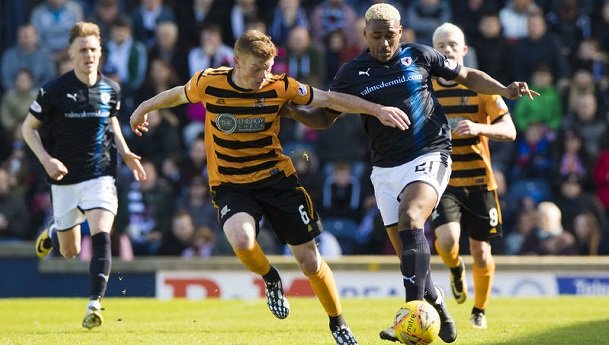 There are three play-off matches on Wednesday evening, kick-off 7.45pm, with the second legs taking place on Saturday.

There are three play-off matches on Wednesday evening, kick-off 7.45pm, with the second legs taking place on Saturday.

Alloa Athletic v Raith Rovers - Championship play-off semi-final, 1st leg
Alloa's 0-0 draw at Stark's Park on Saturday denied Raith the Ladbrokes League 1 title as Ayr United went up as champions and Jim Goodwin's side have lost just three of their last 16 games. Barry Smith's men are unbeaten in seven matches and haven't lost at home while their away record is seven wins, six draws and five defeats. Both meetings between the sides at the Indodrill Stadium this season have ended all square.

Arbroath v Dumbarton - Championship play-off semi-final, 1st leg
The Red Lichties are aiming for a second successive promotion with Dick Campbell while the Sons are looking to secure another season in the Championship under Stevie Aitken. Arbroath finished fourth in League 1 after losing 3-0 to Queen's Park at Hampden on Saturday but had won their two games prior to that. Dumbarton have lost nine of their last 10 matches, the exception being a 3-2 win against Dundee United.

Stirling Albion v Peterhead - League 1 play-off semi-final, 1st leg
Peterhead are favourites to progress to the final against Stenhousemuir or Queen's Park, who drew 1-1 in their first leg last night. The Blue Toon have won their last six matches but were pipped for the title by Montrose. Stirling are seven matches without a win but ended a run of four straight losses with a 1-1 draw against Stenhousemuir on Saturday. Peterhead have an outstanding away record this season and Jim McInally's men won 1-0 on both visits to Forthbank in the regular season.