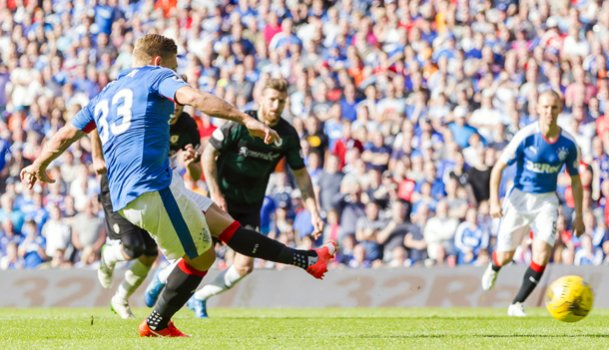 Rangers moved five points clear at the top of the Ladbrokes Championship with a 5-0 win over Raith Rovers at Ibrox on Saturday.

Rangers moved five points clear at the top of the Ladbrokes Championship with a 5-0 win over Raith Rovers at Ibrox on Saturday.

Lee Wallace, James Tavernier and Barrie McKay were all on target before Martyn Waghorn added two penalties for Mark Warburton's side.

Promoted Morton are into the top four after beating Livingston 4-2 at Almondvale - a result that sees Livi drop to the foot of the table. Ben Gordon was sent off after half an hour and the visitors took full advantage with goals from Stefan McCluskey, Denny Johnstone, Bobby Barr and Jon Scullion. Jordan White and Jordyn Sheerin reduced the deficit late on.

St Mirren earned their first league victory of the season, beating Queen of the South 2-0 at Palmerston with goals from Sean Kelly and Steven Thompson.

Alloa moved off the bottom of the table with a 2-0 win at Dumbarton thanks to second-half goals from Graeme Holmes and Eddie Ferns.

Second-placed Falkirk's home game with Hibernian was postponed this weekend due to international call-ups for Hibs.