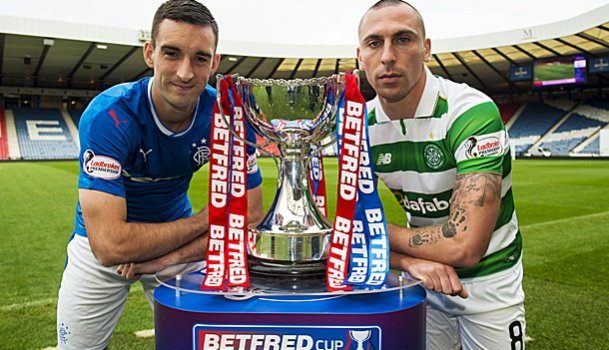 Rangers and Celtic meet in the second Betfred Cup semi-final at Hampden Park on Sunday, live on BT Sport with a 2.15pm kick-off.

Rangers and Celtic meet in the second Betfred Cup semi-final at Hampden Park on Sunday, live on BT Sport with a 2.15pm kick-off.

The winners will face Aberdeen – who beat Morton 2-0 on Saturday – in the final at the National Stadium on Sunday November 27.

Road to the semis: Rangers topped Group F without conceding a goal, beating Motherwell (2-0), East Stirlingshire (3-0), Annan Athletic (2-0) and Stranraer (3-0). In the last 16 they saw off Peterhead 5-0 at Ibrox and it was 5-0 again when Queen of the South visited in the quarter-finals. Celtic entered the tournament in the last 16 and thrashed Motherwell 5-0 at Parkhead before beating Alloa Athletic 2-0 in the quarter-finals, also at home.

League Cup pedigree: Rangers have won this trophy a record 27 times – the last of those came against Celtic in 2010/11. Celtic have claimed the League Cup 15 times, most recently in 2014/15 when they beat Dundee United 2-0. The Ibrox club are appearing in their 50th League Cup semi-final while Sunday marks a 41st appearance at this stage for the Parkhead men.

Recent meetings: Celtic won 5-1 in the Premiership last month, helped by a Moussa Dembele hat-trick, but Rangers came out on top in April’s Scottish Cup semi-final. Mark Warburton’s men won on penalties after a 2-2 draw. The last League Cup clash was in February 2015 when Celtic triumphed 2-0 in the semi-finals thanks to goals from Leigh Griffiths and Kris Commons.

Team news: Rangers will be without injured midfielder Niko Kranjcar but Jordan Rossister could return to the squad. Celtic boss Brendan Rodgers has a fully-fit squad to choose from.

Tickets: The match is sold-out.

Extra time: If the scores are level after 90 minutes, extra time and penalties, if required, will settle the outcome.

Turnstiles: Open at 12.45pm. All fans attending should note that enhanced search arrangements will be in place at this fixture. This additional safety measure has the potential to delay entry into the ground so fans are strongly encouraged to get to the stadium as early as possible.

Travel information: Advice from Police Scotland can be found HERE