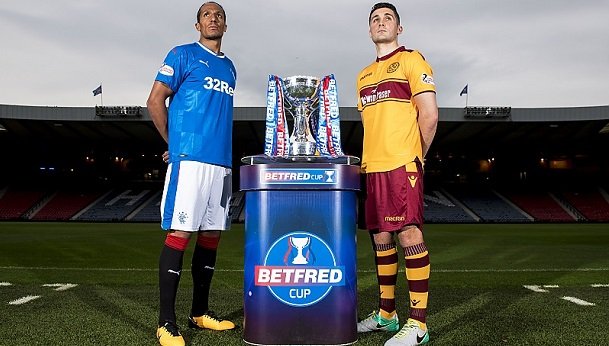 Rangers and Motherwell&nbsp;meet in the second Betfred Cup semi-final at Hampden Park on Sunday, live on BT Sport with a 2.30pm kick-off.

Rangers and Motherwell meet in the second Betfred Cup semi-final at Hampden Park on Sunday, live on BT Sport with a 2.30pm kick-off.

Road to the semis: Motherwell had a 100% record in Group F. They kicked off with a 5-1 win over Queen’s Park at Hampden Park then dismissed Morton 4-0 but required late Elliott Frear goals to see off League 2 sides Edinburgh City (2-1) and Berwick Rangers (1-0).

Rangers entered in the last 16 and Alfredo Morelos bagged a double as they hammered Dunfermline Athletic 6-0 at Ibrox. It was a closer call in the quarter-finals but Pedro Caixinha’s side won 3-1 after extra time against Partick Thistle at the Energy Check Stadium at Firhill.

Past League Cup meetings: The sides met in the semi-finals in 2010/11 when Rangers won 2-1 at Hampden with a Steven Naismith goal after Keith Lasley cancelled out Maurice Edu’s opener. Rangers won 2-0 in the group stage at Fir Park last July and also prevailed by the same score in a third-round tie at Ibrox in September 2012 despite being in the Third Division at the time and facing a Well side who were top of the SPL.

League Cup pedigree: Rangers have won this competition a record 27 times but not since 2010/11, when they beat Celtic after extra time. They lost 1-0 to their city rivals at this stage 12 months ago. Motherwell’s sole League Cup triumph came in 1950/51 when they defeated Hibernian 3-0. Well’s most recent semi-final success was a dramatic 3-2 extra-time win over Hearts at Easter Road in 2004/05 but they lost the final 5-1 to Rangers.

Current form: Both teams arrive at the National Stadium in good form, with just one defeat in the last eight matches. Motherwell hit back to beat Hamilton Accies 2-1 at the SuperSeal Stadium last Saturday while Rangers earned a 3-0 victory over St Johnstone at McDiarmid Park on the Friday night. The semi-finalists are separated by only one point in the Ladbrokes Premiership.

This season: Rangers won 2-1 at Fir Park on the opening weekend of the season thanks to a Graham Dorrans double. Ben Heneghan scored for Motherwell.

Stats: Rangers are unbeaten away from Ibrox in domestic football since losing the Scottish Cup semi-final to Celtic in April. Motherwell’s last win over Rangers came in May 2015 when they retained their top-flight status with a 6-1 aggregate victory in the play-offs.

Extra time: If the scores are level after 90 minutes then the tie will be settled after extra time and, if required, penalty kicks.

Programme: An A4 souvenir programme will be on sale, priced £5.

Turnstiles: Open 90 minutes before kick-off. Fans are urged to arrive in plenty of time.

Important information: All fans should note that enhanced search arrangements will be in place. This additional safety measure has the potential to delay entry into the ground so fans are strongly encouraged to get to the stadium as early as possible. Turnstiles open 90 minutes before the match begins, ie 1.00pm

Roadworks: There are major roadworks on Aikenhead Road near the stadium. Full details and recommended travel routes can be found HERE.