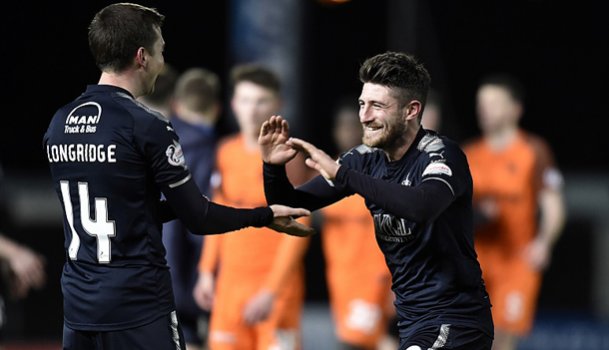 Falkirk thrashed Dundee United 6-1 in the Ladbrokes Championship on a remarkable Saturday afternoon at the Falkirk Stadium.

Falkirk thrashed Dundee United 6-1 in the Ladbrokes Championship on a remarkable Saturday afternoon at the Falkirk Stadium.

Billy King scored early on for United but Peter Grant and Reghan Tumilty turned things round before half-time. Louis Longridge (2), Tommy Robson and Lewis Kidd all struck in the second half for Paul Hartley's men. St Mirren are now six points clear at the top after beating Inverness Caley Thistle 1-0 in Paisley with a Gavin Reilly goal.

Joe Cardle was on target as Dunfermline Athletic won 1-0 at Dumbarton to climb to third place while Queen of the South are into the top four after Chris Kane earned them a 1-0 success at Livingston. Bottom club Brechin City held Morton to a 1-1 draw at Glebe Park, with Connor McLennan's early goal quickly cancelled out by Bob McHugh.

Raith Rovers moved to the top of Ladbrokes League 1 with a 2-1 win over Forfar Athletic to maintain their perfect home record. Ayr United were knocked off the summit after losing 2-1 to Arbroath at Somerset Park, where Leighton McIntosh grabbed a late winner. Third-placed Alloa Athletic saw off Albion Rovers 3-1 at the Indodrill Stadium while all the goals came in the last 15 minutes as Queen's Park and Stranraer drew 2-2 at Hampden. It finished 0-0 between Airdrieonians and East Fife at the Excelsior Stadium.

Lewis Milne netted the only goal as Montrose ended Annan Athletic's nine-match unbeaten run with a 1-0 win at Galabank to stay a point clear at the top of Ladbrokes League 2. Rory McAllister scored twice as Peterhead kept up the pressure with a 4-1 victory at Stenhousemuir and Stirling Albion moved back into the top four by beating Berwick Rangers 2-0 at Forthbank. Elgin City defeated Clyde 2-1 at Borough Briggs and Edinburgh City were 2-0 winners away to bottom club Cowdenbeath.