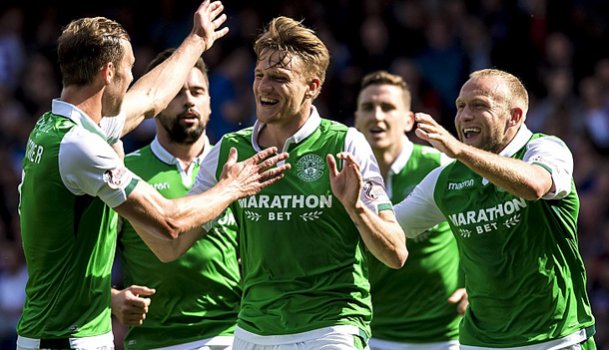 Hibernian beat Rangers 3-2 at Ibrox on Saturday and are one of four teams in the Ladbrokes Premiership with maximum points after two games.

Hibernian beat Rangers 3-2 at Ibrox on Saturday and are one of four teams in the Ladbrokes Premiership with maximum points after two games.

Alfredo Morelos gave Gers an early lead but Simon Murray equalised before the hosts had Ryan Jack sent off. A James Tavernier OG and a Vykintas Slivka goal had Hibs in command but Tavernier reduced the deficit late on.

St Johnstone top the table from Celtic on goals scored after a 4-1 home victory over Motherwell, who had three players sent off. Michael O'Halloran bagged a double for Saints.

Shay Logan got the winner as Aberdeen came from behind to defeat Ross County 2-1 in Dingwall. Hearts beat Kilmarnock 1-0 at Rugby Park with an early goal from Esmael Goncalves, who was later sent off, as was Killie's Kirk Broadfoot.

A Darian MacKinnon goal set Hamilton Accies on their way to a 3-0 win over Dundee at the SuperSeal Stadium.

Dundee United are two points clear at the top of the Ladbrokes Championship thanks to a 2-1 home win over Queen of the South.

Dunfermline Athletic are second after thrashing Inverness CT 5-1 at East End Park, helped by a double from Joe Cardle. Michael Tidser converted two penalties as Morton saw off St Mirren 4-1 in the Renfrewshire derby at Cappielow.

Falkirk were held to a 1-1 draw by Dumbarton while Brechin City hit back for a 2-2 draw with Livingston at Glebe Park.

Ayr United are the only team with maximum points in Ladbrokes League 1 after beating Forfar Athletic 3-0 at Somerset Park.

Lewis Vaughan netted a double as Raith Rovers saw off Stranraer 3-0 at Stark's Park while Connor Shields and Alan Trouten did likewise in a 5-2 win for Albion Rovers over Queen's Park at Hampden.

East Fife beat Alloa Athletic 1-0 at Bayview and it finished 1-1 between Airdrieonians and Arbroath at the Excelsior Stadium.

Peterhead are second on goal difference after a 3-0 victory against Elgin City at Balmoor, helped by a Rory McAllister brace.

Clyde beat Annan Athletic 2-1 at Broadwood, Cowdenbeath edged out Edinburgh City 1-0 at Central Park and it was 1-1 between Montrose and Stenhousemuir at Links Park.