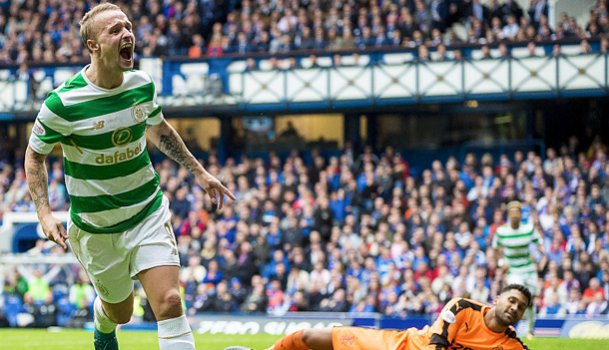 Celtic beat Rangers 2-0 at Ibrox in the Glasgow derby this afternoon to move five points clear at the top of the Ladbrokes Premiership.

Celtic beat Rangers 2-0 at Ibrox in the Glasgow derby this afternoon to move five points clear at the top of the Ladbrokes Premiership.

Tom Rogic and Leigh Griffiths scored in the second half as Brendan Rodgers' side proved too strong for Pedro Caixinha's team.

St Johnstone are up to second place after coming from behind to beat Hamilton Accies 2-1 at McDiarmid Park and Hibernian earned a 1-0 victory at Ross County.

There were 1-1 draws between Kilmarnock and Dundee and Partick Thistle and Hearts while Motherwell host Aberdeen on Sunday, live on BT Sport at 12.15pm.

Dunfermline Athletic have a two-point cushion at the summit of the Ladbrokes Championship after beating bottom club Brechin City 3-0 at Glebe Park.

Scott McDonald scored a late winner as Dundee United edged out Morton 2-1 at Tannadice to go second while Livingston move into the top four thanks to a 2-0 success at Falkirk.

Dumbarton came from behind to beat Inverness Caley Thistle 2-1 at the YOUR Radio 103FM Stadium and St Mirren are at home to Queen of the South on Sunday, live on BBC ALBA at 4.10pm.

Ryan McCord bagged a hat-trick as away specialists Arbroath thumped Stranraer 6-2 at Stair Park while Ayr United were 2-0 winners against Queen's Park at Hampden.

Peterhead are second following a 3-0 victory at Edinburgh City and Mark McGuigan netted twice as Stenhousemuir saw off Berwick Rangers by the same score at Ochilview to go third.

Elgin City were also 3-0 winners, against Montrose at Borough Briggs, and it was 1-1 between Clyde and Cowdenbeath at Broadwood.