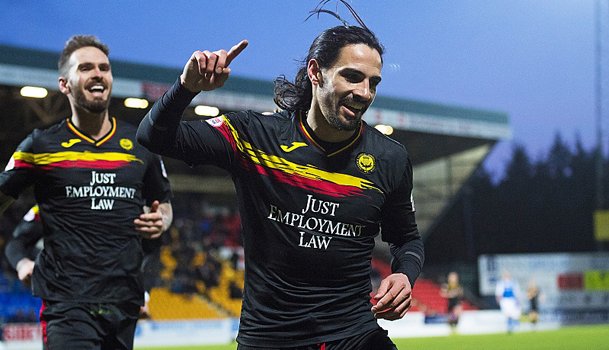 Ladbrokes Premiership leaders Celtic beat Hibernian 1-0 at Parkhead this afternoon thanks to a goal from Leigh Griffiths to stay 11 points clear.

Ladbrokes Premiership leaders Celtic beat Hibernian 1-0 at Parkhead this afternoon thanks to a goal from Leigh Griffiths to stay 11 points clear.

Aberdeen moved up to second spot after coming from behind to defeat Kilmarnock 3-1 at Pittodrie, helped by a Scott McKenna double. Hearts saw their long run of shut-outs ended by Motherwell in a 1-1 draw at Tynecastle, with Curtis Main pouncing in stoppage time after David Milinkovic opened the scoring. There was also a goal deep into injury time as AJ Leitch-Smith sealed a 2-1 triumph for Dundee away to Hamilton Accies. Partick Thistle saw off St Johnstone 3-1 at McDiarmid Park with Ryan Edwards (pictured) sealing the points for the Jags.

Dundee United remain 11 points behind Ladbrokes Championship leaders St Mirren after losing 3-0 to Morton at Tannadice, where Thomas O'Ware opened the scoring for Jim Duffy's men. Livingston are up to third spot after a 2-0 home win over Dumbarton and Stephen Dobbie grabbed a hat-trick as Queen of the South beat bottom club Brechin City 3-1 at Palmerston. A pair of Aaron Muirhead penalties helped Falkirk defeat 10-man Inverness CT 3-1.

Ayr United are top of Ladbrokes League 1 thanks to a 4-1 win over Queen's Park at Hampden while Raith Rovers slip to second after a 0-0 draw at Alloa. It was also 0-0 between Airdrieonians and Arbroath while an Angus Beith brace helped Stranraer go third with a 3-1 success at Albion Rovers. Forfar Athletic are off the bottom after winning 2-1 away to East Fife.

Montrose have increased their lead at the summit of Ladbrokes League 2 to four points after hitting back to beat Stirling Albion 2-1 at Links Park as title rivals Peterhead went down 1-0 to Clyde at Broadwood. Elgin City moved into the top four by beating Stenhousemuir 2-0 at Borough Briggs while Annan Athletic were beaten 3-2 at Edinburgh City. Berwick Rangers saw off bottom club Cowdenbeath 3-1 at Central Park.