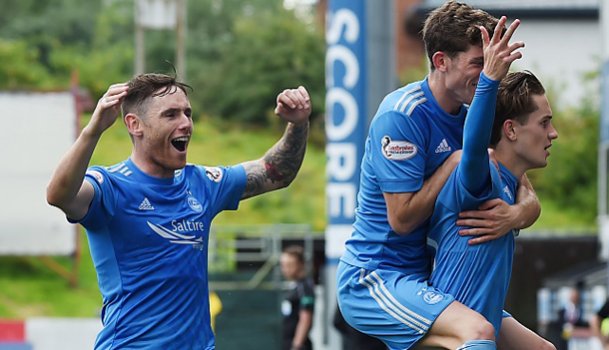 Aberdeen are two points clear at the top of the Ladbrokes Premiership after beating Partick Thistle 4-3 in a Firhill thriller thanks to a late Adam Rooney winner.

Aberdeen are two points clear at the top of the Ladbrokes Premiership after beating Partick Thistle 4-3 in a Firhill thriller thanks to a late Adam Rooney winner.

Champions Celtic were held to a 1-1 draw by St Johnstone, with Callum McGregor equalising for the hosts after Steven MacLean had opened the scoring.

Louis Moult grabbed a spectacular winner as Motherwell came from behind to beat Hearts 2-1 at Fir Park and Hamilton Accies recovered from two goals down to draw 2-2 with Kilmarnock at Rugby Park.

There are two games on Sunday - Dundee host Hibernian, live on Sky Sports at 12.30pm and Ross County face Rangers at 3.00pm, live on BT Sport.

Dunfermline Athletic are the new leaders in the Ladbrokes Championship after cruising to a 4-0 win at Dumbarton while Queen of the South are up to second after Stephen Dobbie hit a hat-trick in a 4-1 victory at Falkirk.

Lewis Vaughan scored a double as Raith Rovers moved to the top of Ladbrokes League 1 with a 5-0 win over local rivals East Fife at Bayview as Ayr United were knocked off the summit, going down 2-1 to Arbroath at Somerset Park.

Airdrieonians defeated Alloa Athletic 2-0 at the Excelsior Stadium to move into the top four, Albion Rovers saw off Forfar Athletic 2-0 at Station Park and Queen’s Park hit back to draw 2-2 with Stranraer at Hampden.

Stirling Albion stay two points clear in Ladbrokes League 2 after beating Peterhead 4-2 at Balmoor, helped by a Darren Smith double. Montrose are second following a 1-0 win at Annan and Elgin City are up to third place thanks to a 3-0 defeat of Edinburgh City at Ainslie Park.

Managerless Berwick Rangers beat Cowdenbeath 1-0 at Central Park and it finished 1-1 between Clyde and Stenhousemuir at Broadwood.