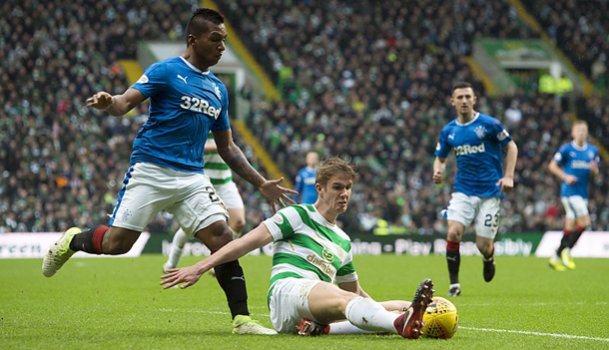 Celtic go into the winter break with an eight-point lead in the Ladbrokes Premiership after a 0-0 draw against Rangers at Parkhead on Saturday.

Celtic go into the winter break with an eight-point lead in the Ladbrokes Premiership after a 0-0 draw against Rangers at Parkhead on Saturday.

It was also 0-0 between second-placed Aberdeen and Hearts, who notched up a club record sixth clean sheet in a row. Hamilton Accies came from behind to beat Motherwell 3-1 in the Lanarkshire derby at Fir Park, with goals from Dougie Imrie, Rakish Bingham and Greg Docherty.

Marcus Haber and A-Jay Leitch-Smith were on target as Dundee defeated St Johnstone 2-0 at McDiarmid Park while Kris Doolan and Conor Sammon struck for Partick Thistle who leapfrogged Ross County at the foot of the table after a 2-0 home win over the Staggies. Hibernian and Kilmarnock drew 1-1 at Easter Road, with Oli Shaw cancelling out Kris Boyd's opener.

Falkirk beat Queen of the South 3-2 to record only their second win of the season in the Ladbrokes Championship thanks to goals from Peter Grant, Myles Hippolyte and Louis Longridge. George Oakley's second-half double helped Inverness CT win 3-2 away to bottom club Brechin City, who led 2-1 at the break with two goals from Jordan Sinclair.

Ladbrokes League 1 leaders Ayr United fell to a shock 3-2 defeat to bottom club Forfar Athletic at Somerset Park despite leading 2-0 with 15 minutes left - Matthew Aitken bagged a double as the Loons hit back. Second-placed Raith Rovers are now just two points back with two games in hand thanks to a 3-0 win over Stranraer at Stark's Park. Albion Rovers scored twice in the closing stages to earn a 2-2 draw with Queen's Park at Hampden and it finished 1-1 between Arbroath and East Fife at Gayfield.

In the day's only game in Ladbrokes League 2, Peterhead moved to within three points of leaders Montrose by ending their 10-match unbeaten league run with a 6-2 win at Links Park, with Jason Brown netting an early double.