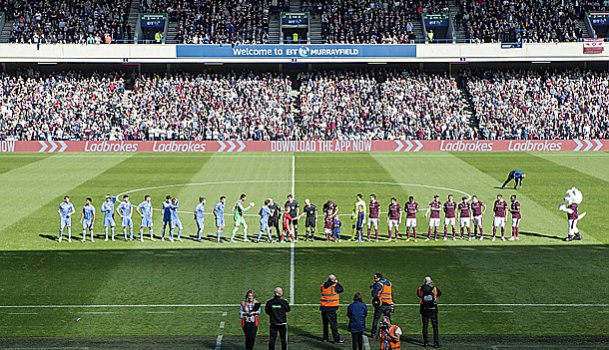 Aberdeen missed the chance to go back to the top of the Ladbrokes Premiership when they drew 0-0 with Hearts at Murrayfield.

Aberdeen missed the chance to go back to the top of the Ladbrokes Premiership when they drew 0-0 with Hearts at Murrayfield.

A crowd of 24,248 saw the game end goalless and the result was enough to move Derek McInnes’ men level on points with leaders Celtic, who have a better goal difference.

Michael O'Halloran scored again as third-placed St Johnstone drew 1-1 with Hibernian at McDiarmid Park while Alfredo Morelos bagged a double as Rangers saw off Dundee 4-1 at Ibrox, with the Dark Blues now bottom of the table.

Motherwell are up to fifth place after beating Kilmarnock 2-0 at Fir Park while Partick Thistle picked up their first point in a 1-1 draw at Ross County.

St Mirren are the new leaders in the Ladbrokes Championship thanks to a 4-2 home win over Inverness Caley Thistle. Cammy Smith and Ian McShane sealed the victory after the visitors had twice hit back at the Paisley 2021 Stadium.

Morton stormed back to beat Dunfermline Athletic 3-2 at Cappielow despite trailing 2-0at half-time to the team who started the day at the summit. Jai Quitongo got the winner for Jim Duffy's men in the third minute of stoppage time.

Third-placed Queen of the South drew 2-2 at Livingston and Dundee United needed a late goal from James Keatings to salvage a 1-1 draw at home to Dumbarton. Brechin City and Falkirk are both still looking for their first win after it ended 1-1 at Glebe Park.

Lewis Vaughan scored for the 10th game in a row as Raith Rovers came from behind to beat Ayr United 2-1 at Stark's Park and move four points clear at the top of Ladbrokes League 1.

Albion Rovers are up to third spot after an impressive 4-1 win over Arbroath at Gayfield while a Grant Anderson double helped Stranraer overcome Airdrieonians 3-1 at Stair Park.

Stirling Albion remain top of Ladbrokes League 2 despite seeing their 100% record ended by Clyde, who were worthy 3-2 winners at Forthbank.

Chris Templeman scored an injury-time equaliser as second-placed Montrose drew 1-1 away to Peterhead and Stenhousemuir are third after defeating Cowdenbeath 1-0 at Ochilview.

Edinburgh City picked up their first points by beating Berwick Rangers 1-0 at Ainslie Park and Annan Athletic earned a 1-0 victory at Elgin City.