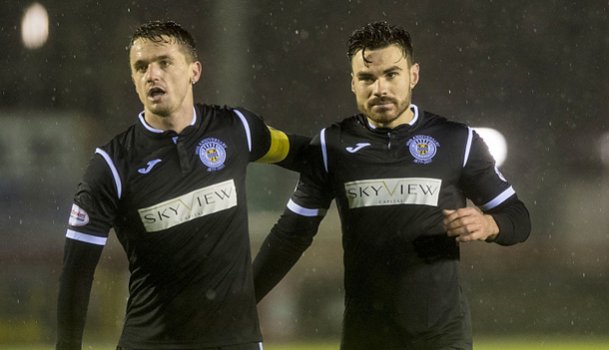 Both games in the Ladbrokes Premiership ended all square on Saturday, while Kilmarnock host Aberdeen on Sunday.

Both games in the Ladbrokes Premiership ended all square on Saturday, while Kilmarnock host Aberdeen on Sunday.

Third-placed Hibernian were held 1-1 by Hamilton Accies at the SuperSeal Stadium, with Antonio Rojano cancelling out Simon Murray's opener. Hearts and Ross County drew 0-0 at Tynecastle.

Ladbrokes Championship leaders Dundee United could only draw 1-1 against bottom club Brechin City at Glebe Park and St Mirren moved to within a point of the summit with a 2-0 win over Inverness CT in the Highland capital. Livingston are up to third thanks to a 3-0 success against Queen of the South at Palmerston and Morton won by the same score at struggling Falkirk. Dunfermline Athletic and Dumbarton drew 2-2 at East End Park.

Craig Moore scored a stoppage-time winner as Ayr United triumphed 2-1 at Alloa to stay three points clear in Ladbrokes League 1 while second-placed Raith Rovers saw off bottom club Queen's Park 2-0 at Stark's Park. Arbroath are up to third after hitting back to beat Forfar 2-1 at Gayfield. A Kyle Wilkie double helped East Fife to the biggest win of the day, 6-1 against Airdrieonians at Bayview. Stranraer v Albion Rovers at Stair Park was postponed.

Montrose are the new leaders in Ladbrokes League 2 after beating Stenhousemuir 1-0 at Ochilview as Stirling Albion were knocked off top spot following the postponement of their home game with Peterhead. Elgin City climbed to third by beating Berwick Rangers 5-1 at Borough Briggs, with Bruce Anderson bagging a double. It was 0-0 between Annan Athletic and Clyde at Galabank and Edinburgh City and Cowdenbeath at Ainslie Park.