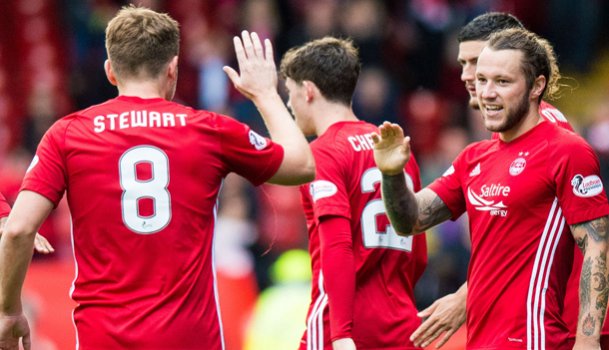 Stevie May scored a double as Aberdeen beat bottom club Dundee 2-1 at Pittodrie to make it three wins from three in the Ladbrokes Premiership.

Stevie May scored a double as Aberdeen beat bottom club Dundee 2-1 at Pittodrie to make it three wins from three in the Ladbrokes Premiership.

Celtic top the table on goal difference after a 2-0 victory at Kilmarnock and St Johnstone also have maximum points after a Michael O'Halloran goal earned them a 1-0 home win over Partick Thistle.

Hamilton Accies leapfrogged Hibernian thanks to a 3-1 success at Easter Road, with Rakish Bingham scoring twice, while Motherwell defeated Ross County 2-0 at Fir Park. Rangers and Hearts drew 0-0 at Ibrox.

Dundee United remain the only club with a 100% in the Ladbrokes Championship after a late Scott McDonald goal saw them beat Brechin City 1-0 at Tannadice. Second-placed Dunfermline Athletic saw off nine-man Falkirk in front of a big crowd at East End Park, with Joe Cardle netting a double.

Queen of the South are third after beating Dumbarton 1-0 at Palmerston and Gavin Reilly scored twice as 10-man St Mirren won 3-1 at Livingston. Inverness Caley Thistle and Morton drew 1-1 in the Highland capital.

Stirling Albion made it three wins out of three in Ladbrokes League 2 with a 2-0 victory over bottom club Edinburgh City at Forthbank.

Montrose are up to second spot after Sean Dillon's goal saw Cowdenbeath beaten 1-0 at Links Park and Stenhousemuir won the battle of the relegated sides, beating Peterhead 3-1 at Ochilview.

Elgin City stormed back from two goals down to beat Clyde 3-2 at Borough Briggs and claim their first league win since February while Blair Henderson scored on his debut as Annan Athletic thumped Berwick Rangers 5-1 at Shielfield.