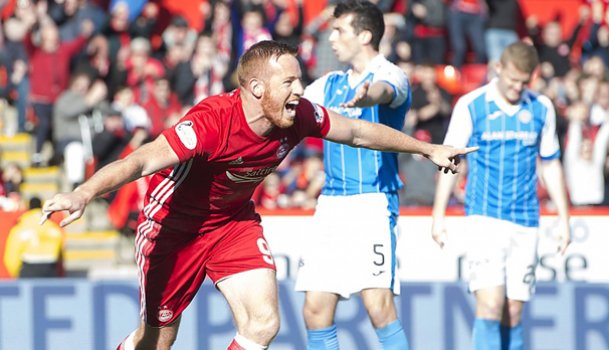 Aberdeen moved level on points with Ladbrokes Premiership leaders Celtic thanks to a 3-0 home win over St Johnstone on Saturday.

Aberdeen moved level on points with Ladbrokes Premiership leaders Celtic thanks to a 3-0 home win over St Johnstone on Saturday.

Adam Rooney scored a hat-trick for the Dons, who remain unbeaten in the league and trail Brendan Rodgers' side only on goal difference. Celtic were held 2-2 by Hibernian at Parkhead, with Callum McGregor scoring early and late and John McGinn bagging a brace for Hibs.

Kerr Waddell grabbed a stoppage-time winner as Dundee beat Hearts 2-1 at Dens Park while Motherwell are up to fifth place after defeating Partick Thistle 3-0 at Fir Park and Owen Coyle steered Ross County to a 2-0 win at Kilmarnock in his first game in charge.

A crowd of 7,585 at East End Park saw Fraser Fyvie score twice as Dundee United leapfrogged Dunfermline Athletic with a 3-1 win. Dale Hilson scored a 78th-minute winner as St Mirren moved to the top of the Ladbrokes Championship with a 2-1 victory over bottom club Brechin City in Paisley.

Joe McKee got the only goal as Falkirk claimed their first league win, 1-0 at Morton. Livingston edged out Dumbarton 2-1 and it was 0-0 between Inverness CT and Queen of the South.

Raith Rovers suffered their first defeat in Ladbrokes League 1, going down 2-1 to Albion Rovers at Cliftonhill, which allowed Ayr United to close the gap to three points with a 3-0 home victory over East Fife.

Scott Stewart netted twice as Airdrieonians saw off Queen’s Park 4-2 at the Excelsior Stadium while there were 1-1 draws between Arbroath and Alloa Athletic at Gayfield and Forfar Athletic and Stranraer at Station Park.

Stirling Albion’s lead at the top of Ladbrokes League 2 was trimmed to four points as Elgin City hit back to draw 2-2 at Forthbank. Stenhousemuir are now second after two goals from Mark McGuigan helped them beat Edinburgh City 3-0 at Ochilview.