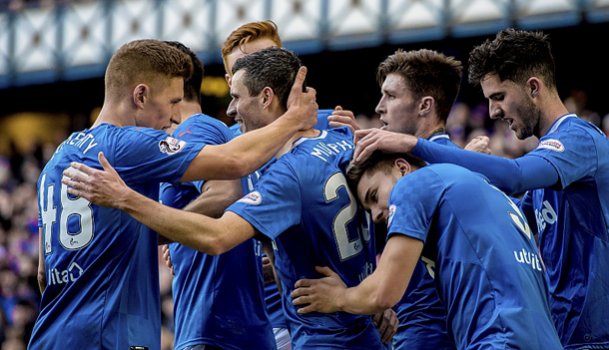 Rangers closed the gap on Ladbrokes Premiership leaders Celtic - who play Aberdeen on Sunday - to six points&nbsp;with a 2-0 home win over Hearts thanks to goals from Jamie Murphy and Russell Martin.

Rangers closed the gap on Ladbrokes Premiership leaders Celtic - who play Aberdeen on Sunday - to six points with a 2-0 home win over Hearts thanks to goals from Jamie Murphy and Russell Martin.

In the day's early game, Kilmarnock hit back from two goals down to draw 2-2 with Hibernian at Rugby Park while Motherwell won 1-0 at Dundee. St Johnstone saw off bottom club Ross County 2-0 at McDiarmid Park and Hamilton Accies leapfrogged Partick Thistle with a 2-1 victory thanks to a last-minute David Templeton goal.

St Mirren are 11 points clear of Livingston in the Ladbrokes Championship after a 1-0 home win over bottom club Brechin City. Morton are up to third place thanks to a 2-0 victory at Inverness while play-off rivals Queen of the South and Dunfermline Athletic drew 0-0 at Palmerston. It was also 0-0 between Falkirk and Dumbarton at the Falkirk Stadium.

Raith Rovers' lead at the top of Ladbrokes League 1 has been cut to four points after they were held to a 2-2 draw by Arbroath at Stark's Park. Second-placed Ayr United, who have a game in hand, saw off Airdrieonians 3-0 at Somerset Park. Stranraer beat Alloa Athletic 1-0 at Stair Park to move to within a point of the fourth-placed Wasps and East Fife defeated Albion Rovers 2-0 at Bayview. Bottom club Queen's Park drew 2-2 with Forfar Athletic at Hampden.

Ladbrokes League 2 leaders Montrose were held to a 2-2 draw by Berwick Rangers at Shielfield as Peterhead, who have a game in hand, closed the gap to three points with a 2-0 win at bottom club Cowdenbeath. Stirling Albion made it five wins on the trot by beating in-form Clyde 2-1 at Forthbank but fourth-placed Stenhousemuir went down 2-0 to Annan Athletic at Galabank and Edinburgh City thumped Elgin City 4-0 at Ainslie Park.