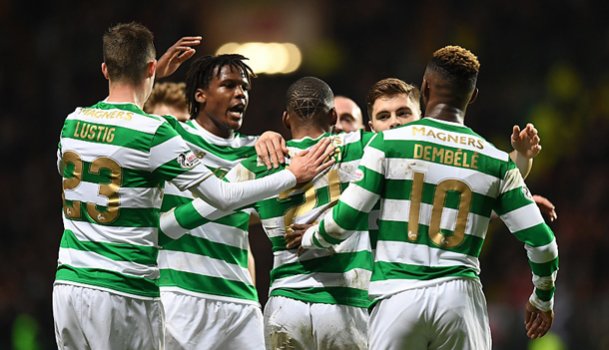 Review of Saturday&#39;s action across the four divisions of the SPFL, with all 42 clubs in action this afternoon.

Review of Saturday's action across the four divisions of the SPFL, with all 42 clubs in action this afternoon.

Celtic moved eight points clear at the top of the Ladbrokes Premiership with a 3-0 home win over closest challengers Aberdeen. Mikael Lustig, Jonny Hayes and Olivier Ntcham scored the goals for Brendan Rodgers' side. Kilmarnock climbed into the top six after coming from behind to beat Rangers 2-1 at Rugby Park with a Kris Boyd double. Oli Shaw netted the winner as Hibernian defeated Ross County 2-1 at Easter Road - a result that dropped the Staggies to the foot of the table. Partick Thistle moved off the bottom after beating Hamilton Accies 1-0 at The Energy Check Stadium at Firhill. Motherwell and Dundee drew 1-1 at Fir Park and it finished 0-0 between Hearts and St Johnstone at McDiarmid Park.

St Mirren stay two points clear in the Ladbrokes Championship despite going two goals down in the opening minutes at Queen of the South. Gary MacKenzie grabbed the winner as Jack Ross' men won 3-2 to keep them ahead of Dundee United, who beat Livingston 3-0 at Tannadice with Paul McMullan scoring a double. Morton are into the play-off places after a Gary Harkins penalty saw off 10-man Inverness CT at Cappielow while Dunfermline Athletic are third after their 2-1 win against bottom club Brechin City at East End Park. Dumbarton stay eight points clear of second-bottom Falkirk after the sides drew 0-0.

Ladbrokes League 1 leaders Ayr United saw their long unbeaten run ended by Airdrieonians, who won 2-0 at the Excelsior Stadium with goals from Cammy Russell and David Brownlie. Raith Rovers closed the gap to five points with a 2-1 victory at Arbroath and Alloa moved up to third place, leapfrogging Stranraer with a 1-0 home win over the Blues. Queen's Park moved off the bottom at the expense of Forfar Athletic thanks to a 3-0 triumph at Station Park while Albion Rovers edged out East Fife 3-2 at Cliftonhill.

Montrose remain six points ahead in Ladbrokes League 2 following their 1-0 win over Stirling Albion at Forthbank, where Gary Fraser got the only goal. Jordon Brown scored a stoppage-time winner as second-placed Peterhead beat Cowdenbeath 3-2 at Balmoor. Stenhousemuir saw off Elgin City 4-1 at Ochilview to climb to third and Annan Athletic are just outside the play-offs after beating Edinburgh City 2-1 at Galabank. It was 0-0 between Clyde and Berwick Rangers at Broadwood.