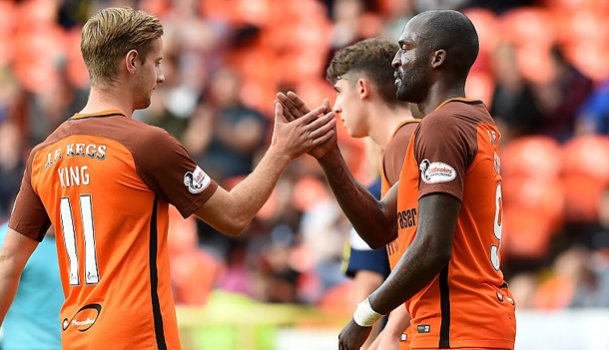 Paul McMullan and Willo Flood both scored in stoppage time for Ray McKinnon’s men after Kevin Cawley had cancelled out Patrick N’Koyi’s opener.

Championship leaders Dunfermline Athletic were 3-0 winners away to Highland League Buckie Thistle, with Nicky Clark scoring twice for the Pars.

Stephen Dobbie bagged a brace as Queen of the South thumped Berwick Rangers 5-0 at Shielfield, with all the goals coming in the second half.

It was an unsuccessful afternoon all round for the U20 sides - Inverness Caley Thistle beat Aberdeen’s youngsters 4-2 at Glebe Park and Lewis Vaughan scored for the ninth game running as Raith Rovers cruised past Ross County Colts 4-0 at Stark’s Park.

Elgin City’s improved form continued with a 2-0 win against Irish outfit Bray Wanderers at Borough Briggs while Dumbarton scored in the last minute of extra time to seal a 2-1 victory over Welsh side Connah’s Quay Nomads at the YOUR Radio 103FM Stadium.

Peterhead won the all-League 2 encounter 2-0 against Annan Athletic at Balmoor and Linfield came through 2-1 against Lowland League Spartans at Ainslie Park.

In the evening game, first-half goals from Nathan Austin and James Craigen earned Falkirk a 2-1 win away to Sligo Rovers.

Montrose and Stranraer had already booked their places in the last 16 while The New Saints host Livingston on Sunday, live on S4C at 2.45pm.