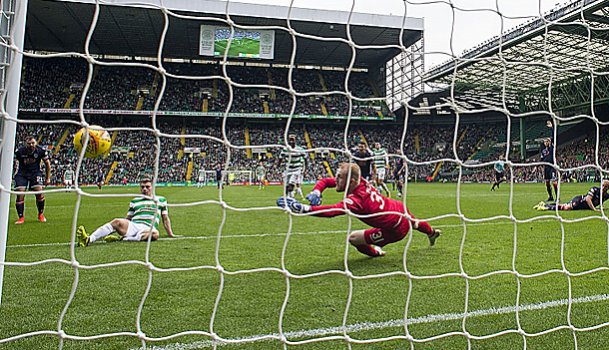 Celtic have a two-point lead at the top of the Ladbrokes Premiership after beating Ross County 4-0 at Parkhead this afternoon.

Celtic have a two-point lead at the top of the Ladbrokes Premiership after beating Ross County 4-0 at Parkhead this afternoon.

James Forrest bagged a second-half double after Tom Rogic and Moussa Dembele had scored in the first half for Brendan Rodgers' men.

Ross Callachan's early goal sent Hearts on their way to a 2-1 victory over Hamilton Accies at the SuperSeal Stadium while a double from Louis Moult saw Motherwell hit back to draw 2-2 at Easter Road, where Hibernian had led through two goals from Anthony Stokes.

Dunfermline Athletic are back at the top of the Ladbrokes Championship following a 3-0 home win over St Mirren, who had Adam Eckersley and Gregor Buchanan sent off late on. Declan McManus, David Hopkirk and Callum Morris all scored for the Pars.

Morton are up to third place after Ross Forbes and Jai Quitongo scored in a 2-1 triumph away to Queen of the South while it finished goalless between Falkirk and Dundee United.

Raith Rovers have a six-point advantage at the summit of Ladbrokes League 1 after thrashing Queen's Park 5-0 at Hampden as Lewis Vaughan scored for the 11th match in a row.

Arbroath also won 5-0 on their travels, hammering local rivals Forfar Athletic at Station Park helped by a Ryan McCord brace. Scott Agnew grabbed a hat-trick as Stranraer cruised to a 4-0 win at Albion Rovers and East Fife beat Airdrieonians 1-0 at the Excelsior Stadium. Lawrence Shankland scored twice for Ayr United as they drew 3-3 with Alloa in a Somerset Park thriller.

Stirling Albion stretched their lead at the top of Ladbrokes League 2 to four points with a 3-1 win over closest challengers Montrose at Links Park where on-loan Hearts winger Callumn Morrison weighed in with a double for the Binos.

Allan Smith netted twice before half-time as Peterhead won 4-0 at Cowdenbeath to leave the Blue Brazil bottom of the table while Craig Beattie scored a stoppage-time winner as Edinburgh City beat Clyde 3-2 at Broadwood.

Aaron Murrell's two goals helped Berwick Rangers storm back to see off Elgin City 3-2 at Shielfield while it was 1-1 between Annan Athletic and Stenhousemuir at Galabank.