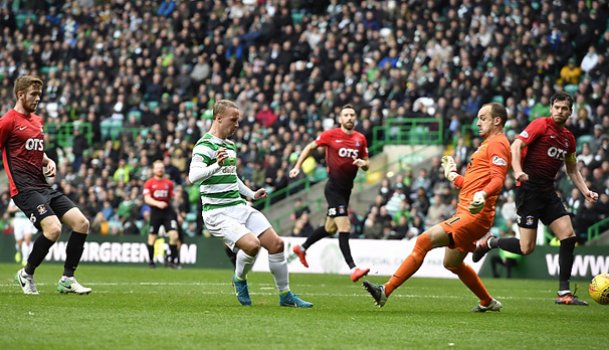 Celtic equalled their own British record of 62 domestic games without defeat with a 1-1 draw against Kilmarnock at Parkhead.

Celtic equalled their own British record of 62 domestic games without defeat with a 1-1 draw against Kilmarnock at Parkhead.

Leigh Griffiths opened the scoring but Jordan Jones equalised to earn Steve Clarke's side their second point of the week in Glasgow.

Aberdeen are just a point behind the Ladbrokes Premiership leaders after Kenny McLean's penalty sealed a 2-1 home win over Ross County while Kenny Miller marked his return to the Rangers side with a double in a 3-1 victory over Hearts at Murrayfield, watched by 32,852.

Hibernian moved level on points with Motherwell thanks to a 1-0 win at Fir Park, courtesy of a Martin Boyle goal, while Miles Storey struck as Partick Thistle overcame St Johnstone 1-0 at Firhill. David Templeton was among the scorers as Hamilton Accies saw off Dundee 3-1 at Dens Park - a result that dropped the Dark Blues to the foot of the table.

St Mirren remain two points clear at the top of the Ladbrokes Championship despite being held to a 2-2 draw by Morton in front of 5,496 fans at the Paisley 2021 Stadium, where the visitors twice came from behind.

Livingston are up to second spot after a 3-2 home win over bottom club Brechin City as Dunfermline Athletic lost 1-0 at Inverness Caley Thistle. Sam Stanton's early double earned Dundee United a 2-0 success at Dumbarton and Stephen Dobbie set Queen of the South on their way to a 4-2 victory over Falkirk at Palmerston.

Ayr United moved level on points with Ladbrokes League 1 leaders Raith Rovers thanks to a 2-0 win over Stranraer at Somerset Park while Rovers were held 1-1 at bottom club Forfar.

Chris Duggan's double helped East Fife beat Arbroath 3-1 at Bayview and leapfrog the Red Lichties to go third in the table. Alloa Athletic defeated Queen's Park 4-0 at Hampden and Albion Rovers earned a 2-2 draw away to Airdrieonians despite finishing with nine men.

Stirling Albion's advantage at the top of Ladbrokes League 2 was cut to two points as they lost 2-1 to Stenhousemuir at Forthbank while second-placed Montrose defeated Edinburgh City 1-0 at Links Park. Peterhead stay third after beating Annan Athletic 1-0 at Balmoor and Elgin City are just outside the top four after seeing off Clyde 4-2 at Broadwood. Berwick Rangers defeated bottom club Cowdenbeath 1-0 at Shielfield.