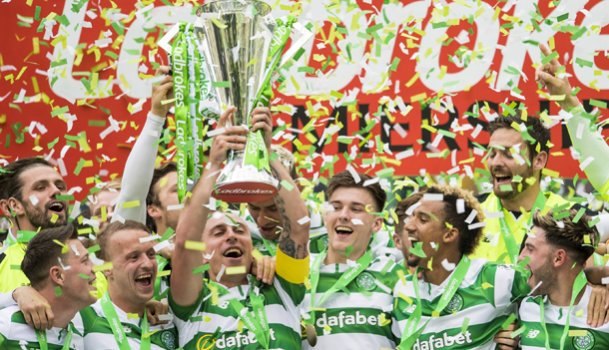 Here&rsquo;s a look at some of the&nbsp;numbers behind&nbsp;2016/17, which brought a Treble for Celtic and title wins for Hibernian, Livingston and Arbroath.

Here’s a look at some of the numbers behind 2016/17, which brought a Treble for Celtic and title wins for Hibernian, Livingston and Arbroath.

47 Celtic completed the season unbeaten in domestic football to claim the fourth treble in their history. Brendan Rodgers’ side played 47 games across the Ladbrokes Premiership, Betfred Cup and Scottish Cup and didn’t lose a single game as the former Liverpool boss followed in the footsteps of Jock Stein (1966/67 and 1968/69) and Martin O’Neill (2000/01) with a clean sweep. Celtic racked up 106 league goals and earned 106 points from 34 wins and four draws as Rodgers' men surpassed the tally of 103 points set by O'Neill's team in 2001/02.

23 Ross County striker Liam Boyce was the leading scorer in the Ladbrokes Premiership with a hugely impressive 23-goal haul, including four in April's Highland derby. The Staggies finished the season seventh in the table but Northern Ireland internationalist Boyce topped the scoring charts, with two more league goals than Celtic's Scott Sinclair.

7 Premiership runners-up Aberdeen twice scored seven goals in a game in 2016/17. In February they thumped Motherwell 7-2 at Pittodrie, helped by an Adam Rooney hat-trick, and the following month the Dons won 7-0 at Dens Park when defender Andrew Considine was an unlikely hat-trick hero. Derek McInnes' men completed their league campaign by putting six goals past Partick Thistle at Firhill, with teenager Scott Wright grabbing a treble.

10 Kilmarnock striker Kris Boyd scored past Scott Fox after just 10.4 seconds of the 3-2 victory over Ross County at Rugby Park at the end of January. It was one of eight league goals scored by the former Scotland internationalist in the season just ended.

4 It was another successful season for St Johnstone under Tommy Wright. Saints finished fourth in the Premiership, just as they did in 2015/16, but earned two more points this time round. The Perth club can now look forward to European football in 2017/18 for the fifth time in six years.

2 Hamilton Accies became the first team to win the Premiership play-off final more than once. They defeated Hibernian on penalties in May 2014 to reach the top flight and beat Dundee United 1-0 on aggregate thanks to a Greg Docherty goal to stay in the Premiership.

19 Hibernian sealed a return to the top flight under Neil Lennon, losing just three of their 36 games. Hibs, along with Celtic, conceded fewest SPFL goals in 2016/17 (just 25) but they were also boosted by the goals of Jason Cummings. Along with Queen of the South's Stephen Dobbie, he was the leading marksman in the Championship with 19 league goals.

2 St Mirren looked certain to drop out of the Ladbrokes Championship after winning only two of their first 23 matches but Jack Ross' side lost just two of their last 14 matches to complete an incredible escape from the relegation zone on the last day of the season. In April alone they hammered Ayr United 6-2, Morton 4-1 and Raith Rovers 5-0.

9 Livingston earned an immediate return to the Ladbrokes Championship by winning the League 1 title in style. David Hopkin's team scored 80 goals - a total bettered only by Celtic - and ended the season with nine straight victories. Liam Buchanan was a key player for the Lions, with 22 league goals.

23 Airdrieonians striker Andy Ryan netted 23 times in Ladbrokes League 1 as the Diamonds finished third in the table. Along with Ross County forward Liam Boyce, ex-Hamilton man Ryan was the SPFL top scorer in 2016/17. He also netted a semi-final play-off winner against Alloa but the Diamonds lost the second leg on penalties.

1 Arbroath clinched the Ladbrokes League 2 title on the final day of the season, pipping local rivals Forfar Athletic who went on to win promotion via the play-offs. A major factor in the Red Lichties' success was their outstanding away record - the only defeat suffered by Dick Campbell's men on their travels was against Clyde at Broadwood back in September.

18 Elgin City striker Shane Sutherland was top scorer in Ladbrokes League 2 with 18 goals, one more than Clyde's Peter MacDonald. He reached that tally by mid-February and was badly missed when injury ruled him out for the last couple of months of the season - Jim Weir's men had looked certainties for the play-offs but ended in fifth place, a point behind Montrose.