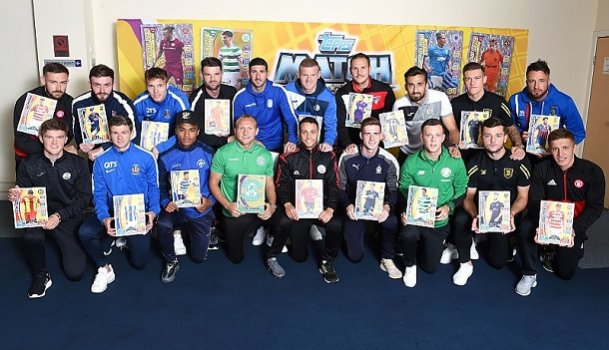 Available now, Topps Match Attax, the world’s most successful football trading card game, offers fans of all ages a fun-filled addition to the new SPFL season. Featuring amazing new designs, brand new cards and the biggest stars of the Scottish Premiership and Championship - this season’s collection is sure to be a huge hit with fans of Scottish football.

Steve Conner, UK Sales Director at Topps, said: “SPFL Match Attax is continuing to grow in popularity year on year, and we’re excited to be able to bring fans our latest SPFL edition trading card game. We’re so pleased to have the support of the Premiership and Championship clubs here today, and to get a few of the players actually playing a game of Match Attax!

“The new collection has some fantastic additions, with new cards to collect, and gives fans the opportunity to play a fresh, modern version of SPFL Match Attax.”

There are 336 cards to collect, including brand new ‘100 Club’ legends and shiny ‘Man Of The Match’ cards to enhance gameplay.

The SPFL Match Attax Starter Pack retails at £5.00 and includes a collector binder, double play pitch, super-size game guide, and a six-card packet containing an exclusive gold limited edition card. A packet of nine cards will be £1.00 for collectors.

There is also the SPFL Match Attax Collector’s tin available in two sizes, with the mini tin retailing at £6.00, with 45 cards including a bronze, silver or gold limited edition card, all packaged in a mini tin to keep collections safe and travel handy! The mega tin will retail at £10.00, and contains 60 cards!