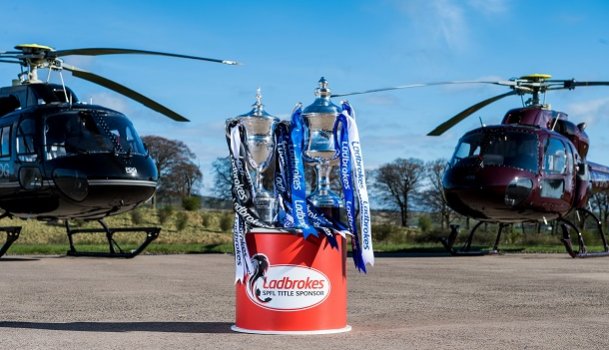 The race for the championship in both Ladbrokes League 1 and League 2 is set for a thrilling final-day conclusion &ndash; with helicopters on standby to deliver the trophies to the winners.

The race for the championship in both Ladbrokes League 1 and League 2 is set for a thrilling final-day conclusion – with helicopters on standby to deliver the trophies to the winners.

In Ladbrokes League 2, leaders Montrose know a point at home to Elgin City will be enough to clinch the championship and a return to the third tier for the first time since 1995/96. Second-placed Peterhead, three points behind but with a 14 goal difference advantage, must beat Edinburgh City at home and keep their fingers crossed for an Elgin win at Links Park.

The SPFL has arranged two PDG helicopters and each will travel with one of the trophies to a site midway between the competing stadia late on Saturday afternoon.

When the champions of both divisions are confirmed, each trophy will then be swiftly delivered to the grounds and presented to the winners in front of their supporters.

Neil Doncaster, SPFL chief executive, said: “Scottish football remains as competitive as ever and it’s terrific to see the title races in both Ladbrokes League 1 and League 2 going all the way to the final day.

“Having helicopters on standby to deliver the trophies adds to the drama and we wish all four clubs involved the very best of luck.”

David MacDonald, Media and Sponsorship for Ladbrokes, said: "The highs and lows experienced by Scottish fans coupled with this end of season emotional spectacle is why Ladbrokes continues to back Scottish football and is proud to do so. We wish all clubs the very best of luck this weekend."