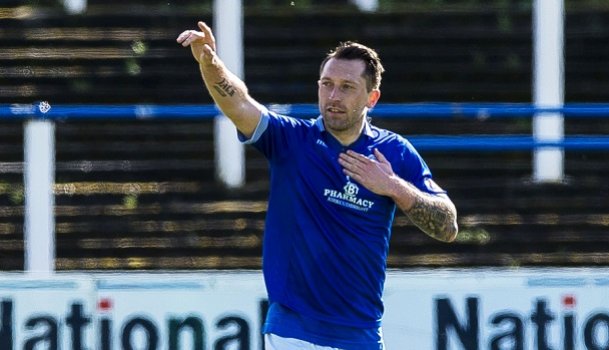 Craig Fowler selects his latest SPFL Team of the Week, with Queen of the South striker Stephen Dobbie the star man in a 3-5-2 formation.

Craig Fowler selects his latest SPFL Team of the Week, with Queen of the South striker Stephen Dobbie the star man in a 3-5-2 formation.

GK - Tomas Cerny (Partick Thistle)
The Thistle shot-stopper made an incredibly good save to deny Motherwell's Zak Jules as the Firhill club secured their place in the top six this season. Getting down in a fraction of a second, the Czech keeper was able to claw the ball around the post, preserving Thistle's 1-0 win.

DC - Clive Smith (St Johnstone)
The on-loan Preston youngster has impressed in his two matches at right-back since deputising for the suspended Ricky Foster. Against Inverness CT on Saturday he equipped himself well once again, showing a willingness to get up and down the flank and proving to be a menace in the air.

DC - Prince Buaben (Hearts)
The midfielder was inserted into the heart of the defence for Saturday's visit of Dundee, as boss Ian Cathro sought to solve his side's defensive issues. Buaben put in a composed performance at centre-back, never looking ruffled as Hearts secured all three points thanks to Esmael Goncalves' early goal.

DC - Ewan McNeil (Clyde)
A solid showing from the Clyde defender, who played the sweeper role in his side's 3-5-2 system as the struggling Cumbernauld club secured a vital victory against Annan Athletic. Clyde now sit three points above Cowdenbeath at the bottom of the League 2 table with four games to play.

MR - James Forrest (Celtic)
Forrest was his usual bundle of energy down the right-hand side as Celtic got back to winning ways with a 3-1 victory over Kilmarnock at Celtic Park. The winger created an early opportunity for Scott Sinclair, which the attacker fired wide, and managed to get himself on the scoresheet later on, reacting quickest to head home from close range.

MC - Kyle Hutton (Airdrieonians)
The former Rangers midfielder controlled the centre of the park as Airdrie picked up a massive victory, beating Brechin to move above their visitors and into third place in the League 1 table. More importantly, the result moves Mark Wilson's men three points clear of East Fife, who are now outside the play-off spots.

MC - Scott Pittman (Livingston)
Livingston are League 1 champions. The West Lothian club defeated Alloa by two goals to one on Saturday, confirming their promotion back to the second tier at the first time of asking. Sending them on their way was Pittman, who opened the scoring with a tremendous strike from 25 yards, running on to a deep corner and sending it into the bottom corner with a half-volley.

MC - Vincent Berry (Stenhousemuir)
Stenny refuse to go down without a fight, defeating promotion-chasing East Fife at Ochilview and moving to within two points of Peterhead at the bottom of the League 1 table. Leading by example was Vinnie Berry, who worked tirelessly in the engine room and set the tempo for his side's display.

ML - Kallum Higginbotham (Dunfermline Athletic)
Kallum Higginbotham's 49th-minute penalty proved to be the difference against Raith Rovers as Dunfermline won the bragging rights from the Fife derby while pretty much ensuring their status as a second-tier club for another season. In addition to his goal, Higginbotham was his usual mix of tricks and strong running in what was a deserved win for the hosts.

FC - Kenny Miller (Rangers)
Playing wide of midfield in a 4-1-4-1, Miller had to do a lot of defensive work in the early part of the match but, when his chance came, boy did he take it! The hitman lashed in the opening goal and made sure of the points by passing beyond Joe Lewis for the second, as Rangers netted three times in five minutes to end Aberdeen's winning run at home.

FC - Stephen Dobbie (Queen of the South)
Ayr United sit bottom of the Championship table after Dobbie struck twice to hand them a 2-0 defeat at Somerset Park. The Queen of the South striker took his tally to 16 league goals for the season, and at times it did seem like it was a personal battle between him and Ayr United goalkeeper Greg Fleming. He is this week's star man.