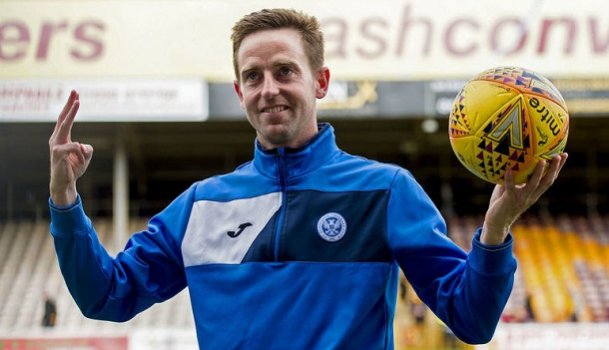 Craig Fowler selects his latest SPFL Team of the Week, with St Johnstone striker Steven MacLean the star man after his hat-trick at Fir Park.

Craig Fowler selects his latest SPFL Team of the Week, with St Johnstone striker Steven MacLean the star man after his hat-trick at Fir Park.

GK - David McGurn (Cowdenbeath)
The goalkeeper made two excellent saves as Cowdenbeath were able to keep a clean sheet in the first leg of their League 2 play-off final against Cove Rangers at Harlaw Park. The hosts deserved to win and would have done so were it not for McGurn's heroics.

DC - David Bates (Rangers)
The boyhood Rangers fan signed off in his last game at Ibrox with a winning goal as the Light Blues defeated Kilmarnock 1-0. The Hamburg-bound defender headed in with four minutes left to keep Rangers in the hunt for second place.

DC - Dougie Hill (Dumbarton)
Dumbarton will face Alloa Athletic in the Championship play-off final meaning, whatever happens, there will be a part-time team in the second tier next term - after defeating Arbroath in their semi. The hosts held on to their one-goal first-leg lead with a 1-1 draw at The Rock, as Hill continually repelled Arbroath's direct approach.

DC - Mason Robertson (Peterhead)
Peterhead can get over their disappointment at losing out on the title when they face Stenhousemuir for a place in League 1. The Blue Toon made it to the final with a comfortable 3-0 win over Stirling Albion (4-0 on aggregate). Robertson scored the first in Saturday's match at Balmoor with a fine header from a corner and strolled through proceedings.

MR - Tom Rogic (Celtic)
The Australian delivered one of the assists of the season so far as his outside of the boot cross found Moussa Dembele in Celtic's 3-1 victory over Hearts. The left-footed midfielder played on the right of a three-man attack but still managed to sparkle at Tynecastle.

MC - Scott Pittman (Livingston)
Livingston hold a 3-2 advantage going home for the second leg of their Premiership play-off semi-final with Dundee United thanks in large part to their excellent midfielder. Pittman scored a fine goal to round off a terrific three-minute comeback from David Hopkin's side.

MC - Kevin Cawley (Alloa Athletic)
Cawley impressed at the heart of the Alloa midfield as the Wasps added to their 2-0 first-leg lead over Raith Rovers with a 2-1 triumph in Kirkcaldy. Jim Goodwin's side will now face Dumbarton for a place in the Championship next term.

ML - Craig Wighton (Dundee)
Dundee are all but safe in the Premiership after Saturday's 1-0 win over Hamilton Accies. Goalkeeper Elliot Parish may have hit the headlines with his late penalty save but the stand-out player was Wighton, who teased and tormented the Accies defence from the left wing, including setting up the only goal for Kevin Holt.

FC - Steven MacLean (St Johnstone)
Steven MacLean signed off in style. The Hearts-bound veteran striker bagged a hat-trick and had the St Johnstone supporters chanting his name as Tommy Wright's side thumped Motherwell 5-1 at Fir Park. For that, he is this week's star man.

FC - Billy Mckay (Ross County)
County are still alive in the relegation battle thanks to Friday's 1-1 draw away to Partick Thistle. The visitors struggled in the early going but managed to get themselves on level terms thanks to Mckay, who impressed throughout the contest.