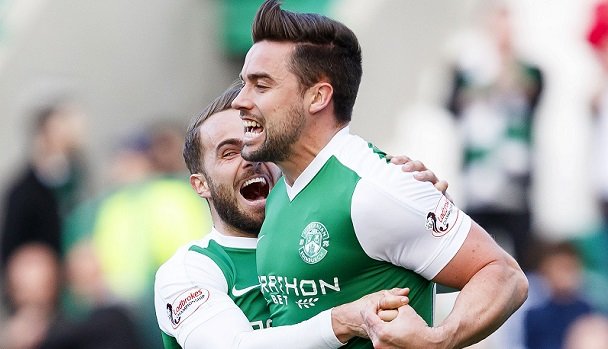 Craig Fowler selects his latest SPFL Team of the Week, with Hibernian defender Darren McGregor the star man for his double as they won&nbsp;the title.

Craig Fowler selects his latest SPFL Team of the Week, with Hibernian defender Darren McGregor the star man for his double as they won the title.

GK - Sean Murdoch (Dunfermline Athletic)
The Pars goalkeeper made a crucial first-half save during his side's 2-0 away win over Dumbarton. With the deadlock yet to be broken, Murdoch somehow pulled off a terrific fingertip stop, keeping the scores level and allowing Dunfermline to take the points with two late goals.

DC - Darren McGregor (Hibernian)
The Hibs defender later credited eating Cola bottles from his pal's pick n' mix for his two-goal first-half haul as Hibs wrapped up the Ladbrokes Championship crown. Regardless of what made him a goalscoring phenomenon at Easter Road, it was a fitting way for the club to confirm their promotion back to the top flight. McGregor has been their best player this season, as he was again on Saturday in the 3-0 win over Queen of the South, and he is this week's star man.

DC - Joe Mbu (Edinburgh City)
Edinburgh City took a massive step towards safety and denied Arbroath the chance of going top with a surprise 1-0 win at Gayfield. Despite conceding the majority of possession to their hosts, they stopped Arbroath from registering a single shot on target - with Mbu a colossus at centre-back - before winning the match through Ryan Porteous' injury-time effort.

DC - Georgios Sarris (Hamilton Accies)
The Accies defender enjoyed a dominant display, getting his head to every high ball as Martin Canning’s men earned a thoroughly deserved 2-0 win at Dundee - their first victory away from home all season.

MR - Jonny Hayes (Aberdeen)
The winger's crossing was a nightmare for St Johnstone, particularly in a first half where Derek McInnes' side built up a lead that the hosts couldn't claw back. His whipped ball into the penalty area forced Tam Scobbie into playing it into his own net, which proved to the winning goal.

MC - Allan Campbell (Motherwell)
A highly impressive display from the 19-year-old in only his second start for the first team. He was a bundle of energy for Stephen Robinson's men and managed to secure the three points against Inverness CT, heading in Scott McDonald's cross to make it 4-2 to the Steelmen.

MC - Iain Flannigan (Alloa Athletic)
Flannigan scored twice and helped Alloa completely dictate the flow of the game from the centre of the park as the hosts ran out 6-1 winners over Brechin City. The one-sided hammering confirmed Alloa's place in the play-offs as runners-up to Livingston.

MC - Rudi Skacel (Raith Rovers)
The veteran midfielder had perhaps his best game in a Rovers shirt, pulling the strings from the base of the midfield as Raith picked up a valuable 2-0 win over Morton at Stark’s Park. It moved them up to seventh spot with just three games remaining.

ML - Myles Beerman (Rangers)
The young Maltese full-back impressed again on the left of the Rangers defence. Though the home side would go on to win 2-0 against Partick Thistle, it took Pedro Caixinha's side a while to get going, with a couple of lung-bursting runs from deep by Beerman putting them on the road to victory.

FC - David Goodwillie (Clyde)
The striker scored three times in the second half as Clyde hit back from 2-0 down to defeat Elgin City 3-2 at Broadwood in what was a huge result for the club's hopes of avoiding the relegation play-off.

FC - Dale Carrick (Cowdenbeath)
The former Hearts striker, on loan from Livingston, netted twice and was a constant threat as Cowdenbeath thumped Stirling Albion 3-0 at Forthbank. Results went against the Blue Brazil, with Clyde and Edinburgh City also winning, but in this form they will still fancy their chances of getting off the foot of the table.