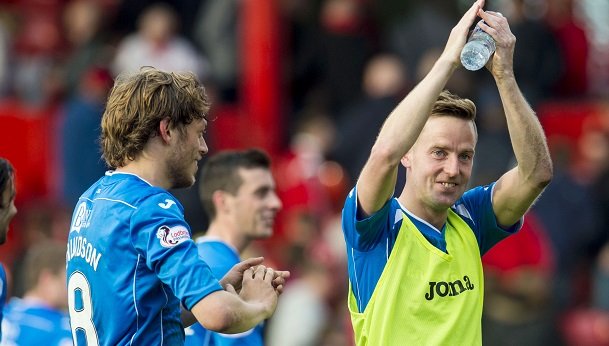 Shaughan McGuigan of the Terrace Podcast selects his SPFL Team of the Week, with St Johnstone striker Steven MacLean the star man:

Shaughan McGuigan of the Terrace Podcast selects his SPFL Team of the Week, with St Johnstone striker Steven MacLean the star man:

GK - David McGurn (Stranraer)
After conceding 10 goals in their first four Ladbrokes League 1 fixtures, the arrival of goalkeeper David McGurn on loan from Raith Rovers has seen the Blues ship just three in their last five matches, a sequence which has seen Brian Reid's side rise from eighth to just a point outside the play-offs. They closed the gap on fourth-placed Airdrieonians thanks to a 1-0 win over Gary Bollan's team on Saturday, a victory that owed much to the reactions and agility of McGurn. Not only did he palm away a Liam Watt penalty in the first period, he also produced a late double save with the score still at 0-0, after repelling the efforts of Caolan McAleer and Scott Smith in quick succession. McGurn has long been a fans’ favourite at Stark's Park, but he's rapidly becoming one at Stair Park, too.

RB - Mustapha Dumbuya (Partick Thistle)
After scoring just three goals in their first nine league games, Partick Thistle managed to notch up the same amount in a little over an hour against Dundee United, as the Maryhill side registered their first win of the season with a 3-0 triumph. Part of Saturday's success must go down to both full-backs noticeably pushing on more than in recent weeks and, while Callum Booth had a fine game down the left-hand side, it was Mustapha Dumbuya on the right, who was the game's stand-out. Both he and Steven Lawless gave United left-back Euan Spark a difficult afternoon, and the Sierra Leone international applied some gloss to his fine performance, after his cross drifted into the net at the back post in the 55th minute. Giving his full-backs a licence to bomb forward and asking his team in general to take more risks, is by definition, a dicey strategy. However, by doing so, manager Alan Archibald appears to have solved his team's goal-scoring conundrum.

DC - Jason Marr (Alloa Athletic)
Danny Lennon returned to Paisley with his Alloa side for the first time since leaving St Mirren in the summer of 2014, and they left with a hard-earned but thoroughly deserved point in a 1-1 draw. Jason Marr had been absent through suspension for Alloa's 3-0 defeat to Livingston the previous week and his excellent display at both ends of the park showed exactly why he had been so badly missed against Livi. Not only did he help to shackle Lawrence Shankland and Steven Thompson for the bulk of the match, he also produced the equaliser - smashing home Burton O'Brien's set-piece from close range, just minutes after the home side had taken the lead. The point ensured Alloa moved up one place to ninth, as they and Livingston traded places at the foot of the Ladbrokes Championship.

DC - Darren McGregor (Hibernian)
With seven clean sheets in all competitions before Saturday, it was felt that Hibernian's defensive stability may have been posed some interesting questions by a Queen of the South side who they only managed to get the better of once last season. An injury to Liam Fontaine meant manager Alan Stubbs was forced to make changes to a backline which had looked impressively stingy. However, Darren McGregor fitted seamlessly into the back four and barely put a foot wrong, as the Hibees picked up an impressive 3-0 win in Dumfries. Last season's Rangers Player of the Year dominated the Queens forward line for the majority of the match, and his calm presence and assured first touch, may ensure he keeps his place in the team for the foreseeable future.

LB - Brian Easton (St Johnstone)
Brian Easton doesn't score too many goals, just four in his career to date, with the last coming for Burnley against Leeds back in 2010. However, even if the Saints left-back learns to become positively prolific during the remainder of his career, it's unlikely that he will be able to top-trump the magnificence of his thumping strike, which opened the floodgates of St Johnstone's 5-1 romp over Ladbrokes Premiership leaders Aberdeen. The loss of Michael O'Halloran and Chris Millar to injury, as well as goalkeeper Alan Mannus through suspension, was supposed to be an impediment to the Perth club's chances against the Dons, but they never looked back after Easton smashed a rip-snorter of a volley past Danny Ward from fully 30 yards. After starting the season with just one win from their first half-dozen fixtures, Saints are now hovering just outside the top six.

RM - Alan Forrest (Ayr United)
Leaders Ayr United continued their impressive form on Saturday, stretching their unbeaten league record to eight games, with a comfortable 5-0 win over Cowdenbeath. While any number of Ian McCall's Honest Men could have found themselves in the Team of the Week, after a wonderful team display, it was right-midfielder, Alan Forrest who received the nod. It was his burst to the bye-line which produced the opening goal after just 28 seconds, when his cross was volleyed home by Jordan Preston, and it was the diminutive winger who made it two, after he finished off some good build-up play from Nicky Devlin. He was heavily involved in the fourth goal too, when his cross was eventually stabbed home by Brian Gilmour. If Ayr can sustain this kind of form, then McCall's men are real challengers for the Ladbrokes League 1 title.

CM - Dean Shiels (Rangers)
Considering Rangers’ imperious start to their league campaign, there was nothing particularly surprising about the Ibrox club wrapping up their ninth consecutive win, with their 3-1 victory over Falkirk. However, what was different, was that their stand-out performer on the day, wasn't one of the usual trio of suspects, in James Tavernier, Lee Wallace or Martyn Waghorn. Dean Shiels returned to the starting XI in place of Gedion Zelalem, who was absent due to his involvement with the USA under-23 side, and the Northern Irishman staked his claim for a more regular place in the side, with a fine performance in the middle of the park. He opened the scoring after just three minutes, slotting the ball past Danny Rogers after a slick one-two with Waghorn and, while Falkirk responded superbly with a stunning riposte from Will Vaulks, it was Shiels, making his first league start of the season, who did more than anyone to drag Rangers over the line for another three points.

CM - James Vincent (Inverness Caledonian Thistle)
Miles Storey has been grabbing much of the attention during Inverness Caledonian Thistle's recent revival, and rightly so, as his four goals in five games have contributed greatly to the Caley Jags’ rise up the table, as well as their continued involvement in the League Cup. However, the return from injury of James Vincent has coincided with John Hughes' side going on a four-game unbeaten run in the Ladbrokes Premiership and, while he's often the unsung hero of the team, he was more directly involved in Saturday's 2-1 derby victory over Ross County. Not only did his presence help to disrupt the flow of Ross County's attacking impetus, he also grabbed Inverness' second goal, evading the marking of Richard Foster to nod home a Danny Devine flick after a Greg Tansey corner. Despite Liam Boyce's late, late goal, John Hughes' men held on for the three points, and are now unbeaten in their last six Highland derbies.

LM - Gramoz Kurtaj (Hamilton Academical)
Hamilton didn't quite manage to triumph over Celtic again, almost 12 months to the day since their 1-0 win at Celtic Park, but it wasn't for the want of trying. Gramoz Kurtaj has impressed since joining from Czech side Banik Most in the summer and has been compared favourably to ex-Accie Tony Andreu, with his willingness to drive at opponents, and an eye for an assist. However, while the aforementioned Andreu was a prolific scorer of goals, Kurtaj only had one to his name before Sunday, although he picked a fine moment to double his season's tally, after the German midfielder's parents travelled to take in their first ever Hamilton fixture. Receiving a long pass forward, he bodied Celtic defender Dedryck Boyata out the way, before calmly sweeping the ball past Craig Gordon for the opener after just four minutes. It was confirmation, if any were required, that Martin Canning has unearthed a special talent.

CF - Leigh Griffiths (Celtic)
With Scotland's vital international against Poland looming large on Thursday, Celtic's Leigh Griffiths picked an ideal opportunity to not only notch up his 12th goal of the campaign, but also chip in with an assist, as Celtic closed the gap on Aberdeen, with a come-from-behind 2-1 victory over Hamilton Accies. Trailing to Gramoz Kurtaj's composed, early strike, it was Griffiths’ set-piece delivery which helped to restore parity, when his cross was nodded home by Dedryck Boyata after 26 minutes. The match was turned round completely just five minutes later, when Griffiths peeled away from Ziggy Gordon, before hanging in the air a fraction longer than appeared possible, to head home a cross from Saidy Janko. Coming off the back of a fine, poacher’s effort against Fenerbahce in Europe last week, Griffiths will hope his form could see him fill Gordon Strachan's forward berth at Hampden Park.

CF Steven MacLean (St Johnstone)
St Johnstone's remarkable 5-1 win over Aberdeen on Saturday means they have scored 21 goals in 10 Premiership matches this season, a total that is only bettered by Celtic. As an indicator of just how different the Perth Saints’ approach has been this term, it took them until the last weekend of January to register the same amount last season. Much of that has been down to the return to form of Steven MacLean, and he gave a virtuoso display against the Dons on Saturday, helping himself to two goals and an assist in the process. Aberdeen still harboured hopes of mounting a comeback, despite being 3-1 down at the start of the second period, but MacLean's excellent movement towards the front post, and sublime header, made the points safe. His second, St Johnstone's fifth, was simpler but well worked, peeling away to the back post to turn home a Graham Cummins cross. He then finished his performance off, by producing the finest summersault celebration Pittodrie has seen, since Julius Agahowa scored a double for Nigeria against Scotland, back in April 2002.